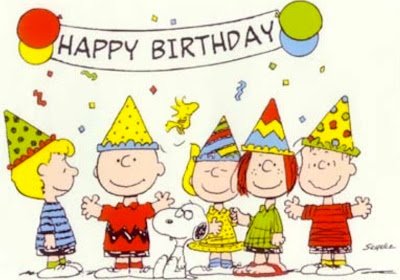 By coincidence, today is PEANUTS' birthday. The reason that's a coincidence is that the other day, I started rereading a couple of my PEANUTS volumes for the first time in years and years and was once again struck by the near perfection of PEANUTS  as a comic strip.

From the characters and the art-style to the gags and the sometimes deeper meanings behind them, PEANUTS works on so many levels where other strips just sit there trying--and often failing--to be funny.

I don't like everything. I never cared for Spike or Snoopy's other relatives, for instance. And Schulz's horribly squiggly lines of later years make me all too painfully aware of his mortality, effectively taking me out of the "reality" of the strip itself.

And reality is the right word. In spite of the fact that its continuity over time is often nil and the odd inequity of the aging process amongst the various characters, Charlie Brown, Lucy, Peppermint Patty and Snoopy present a very definite reality of their own that's able to seemingly effortlessly and painlessly comment on ours. While the strip does not seem as revered today as it did in its heyday, spend any little amount of time with these kids and it's impossible not to get sucked in. Unlike many strips which are best enjoyed in small segments, PEANUTS has you wanting to binge and then leaves you wanting more. That explains the name, I guess. Luckily there are so many collections out there. If you have one, might I suggest reading it in honor of the anniversary today?  If you don't, check any used bookstore and you should find a collection of PEANUTS, still the greatest comic strip of all time.

Posted by Booksteve at 7:32 AM