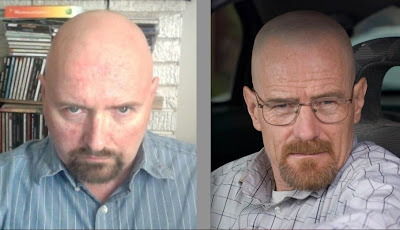 Last week I decided to try the highly touted MAD MEN on NetFlix. In spite of the amazing attention to period detail, I was not impressed. There was not a single character that stood out to me. I tried two episodes. I didn't hate it. I just didn't see any reason to go back. I could now say I had seen MAD MEN. So what next? Might as well try BREAKING BAD.

And I liked it.

Having been turned off by the premise from the very beginning, I had blissfully ignored BREAKING BAD through nearly all 5 seasons. At the time I finally decided to watch it last week, I didn't even yet realize that it was coming upon its series finale.

But I liked it.

Unlike MAD MEN, there were likable characters herein spite of the premise. They weren't people I'd like in real life, mind you, but as characters, they were delineated well by both the writers and the actors.

Over the course of the weekend, I watched 16 episodes including all of Season 1, the beginning of Season 2, the penultimate episode and the grand finale.

One reason I liked Walter White is that he so much reminded me of myself both visually and in his temperament. I rarely lose my temper but you really don't want to be around me when I do. Perhaps because of that connection, I could relate to him and his problems from the beginning and when his problems become surreally dangerous, I was right there with him!

While everyone in the ensemble cast is quite well-cast and uniformly excellent, Bryan Cranston--an actor who had previously made absolutely zero impact on me--was amazing. The show's pacing is deliberately such that one can follow along with the subtleties of his transformation from Walter to Heisenberg almost imperceptibly. But to actually pay attention to it is to relish a brilliant actor in the role of a lifetime.

Yes, I still have about 40 episodes or more to go and I WILL watch them, but flashing forward to the conclusion as I did only served to emphasize the brilliance of this show and the once in a lifetime combination of actors and creators.

I had planned on sampling DEXTER next, another series I've never seen, but that idea seems so pointless in the face of truly great television drama and the joys of Bryan Cranston's performances.

I know a lot of other folks have never tried BREAKING BAD either. It makes no concessions to political correctness and it is most definitely NOT appropriate for all ages. That said, if you long for the days when TV wasn't mindless, forgettable fluff, try it.

Posted by Booksteve at 7:54 AM