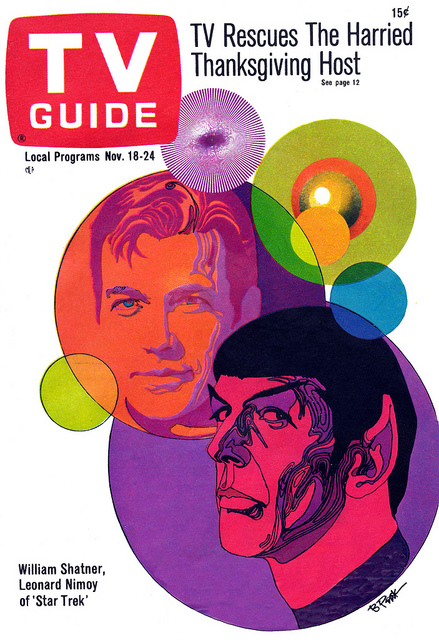 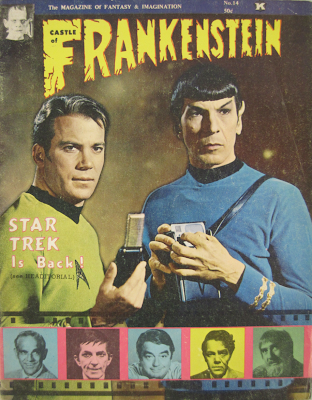 September 8th, 1966 saw the debut of STAR TREK. At the time, few would have found it to be much more than the usual TV sci-fi fare and undoubtedly no one anywhere could have foreseen how STAR TREK would ultimately change pop culture as we knew it then.

I was seven at the time and we didn't watch STAR TREK. We watched MY THREE SONS on CBS rather than the first half and then switched to ABC for the highly rated BEWITCHED for the last half. It wasn't until rerun season that I caught a few episodes here and there. As far as I knew, my friends weren't watching it either as all we ever talked about at school was BATMAN and LOST IN SPACE.

But there was something special in those reruns, something that made me watch the show with a little more regularity by the third (and, unfortunately, least interesting season). So when it was canceled, I missed it. I didn't write NBC like so many did. After THE MUNSTERS and IT'S ABOUT TIME, I had come to accept that shows I liked got canceled all the time. Inevitably, I moved on into the seventies, leaving STAR TREK behind me. 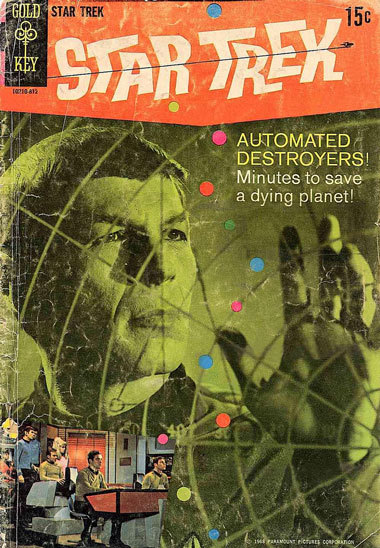 That's when the phenomenon hit.

In syndicated reruns, ST became more popular than it had ever been on the network. Those who had organized to try to save the series in its original run morphed into fan clubs and their fan club gatherings went from meetings to conventions. STAR TREK fanzines became STAR TREK magazines and books.

Initially derided in the press as juvenile, low intelligence adults wearing silly costumes, we knew that was wrong. We knew that the best episodes, budgetary conditions aside, had some of the best writing, acting and production in television history. We knew that STAR TREK had risen far above the level  of sitcom sci-fi of shows like LOST IN SPACE. Just as we knew that STAR TREK was better, we embraced its underlying message of hope that we could ALL be better in the future. 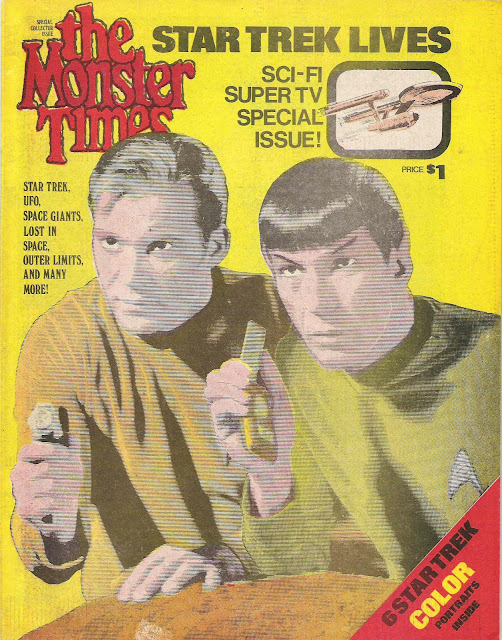 For the actors, it was slow going as so many of them other than William Shatner and Leonard Nimoy were immediately typecast  and found difficulty getting work. As things developed, however, they, too, became aware that they had, in fact, been involved in something very, very special. 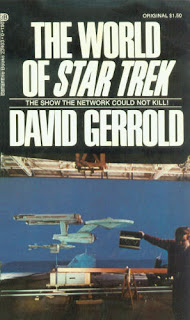 In 1973, most of the show's cast returned in all-new animated episodes. This was an unprecedented thing in television at that time. The writing was amazing, very much on par with or even better than that of the original series. Unfortunately, the show was hampered by very limited animation, a heavy reliance on music and the fact that the actors' voices were recorded separately...and generally sounded like it. No interaction at all. 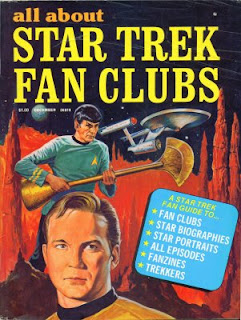 There was talk of the series returning to NBC. Then it was said to be the flagship series of an all new fourth network, albeit without Leonard Nimoy returning. This version made quite a bit of progress toward becoming reality and we fans ate it up in all the magazines from TV GUIDE to  STARLOG which debuted in 1976 and based many of its early, pre STAR WARS issues around TREK.

When STAR WARS came along, the rules changed. Sci-fi itself was now suddenly mainstream and A list and no property was in a better position to take advantage of that than STAR TREK. The TV series idea was scrapped and Roddenberry began work on a multi-million dollar big-screen version of STAR TREK that would incorporate some of the concepts created for the aborted episodes. Even Nimoy agreed to return for it.

After literally a decade of keeping the fires burning, spreading the gospel of STAR TREK and pushing for its return one way or another, we all loved 1979's slow, flashy and cerebral STAR TREK--THE MOTION PICTURE...even if we didn't like it all that much. We had accomplished our goal and, for many of us, it was assumed that was that. 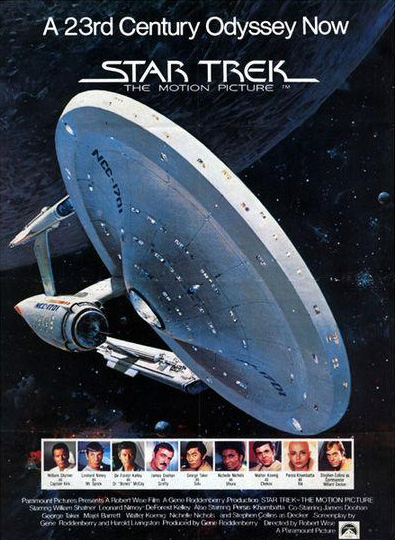 I, for one, was surprised when STAR TREK II: THE WRATH OF KHAN was announced. On its arrival three years later, it was everything the overly ambitious MOTION PICTURE had not been. Everyone was back in character, continuity was there to the original series (even though they famously got some of that continuity wrong) and the action level was raised considerably without hurting the intelligence of the script. Fans credited new writer/producer Nicholas Meyer, known mainly as  a bestselling mystery author, with the astonishing revival.

Leonard Nimoy himself took the reins for STAR TREK III which seemingly brought the whole series to a flaming conclusion.

But then Nick Meyer returned for STAR TREK IV, the most atypical film episode and yet my personal favorite and the favorite of many less-rabid TREK fans.

Shatner got to try his hand at V which seemed to miss every point about what made th previous three movies good. Bad story, bad characterizations, poor continuity with previously established canon and too much (and too unfunny) comedy.

It was around this time that rumors started regarding a return to TV...only without the original cast! Many fans felt betrayed but were reassured that the original cast would continue the theatrical features. The mags and zines became filled with rumors of new characters and castings. STAR TREK: THE NEXT GENERATION had some major shoes to fill for those of us who'd raised the original series and its crew up to the pedestal where they resided. 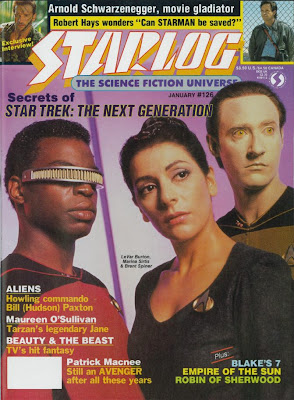 And they filled them.

By this point, although he still acted as though he was running things and many of us presumed he was, Gene Roddenberry was merely a figurehead with Harve Bennett running the films and eventually Rick Berman the TV showrunner.

STAR TREK: THE NEXT GENERATION, with its state of the art special effects, well-thought out characters and brilliant, perfect casting debuted to nearly universal acclaim and went on to seven seasons of amazing television that wisely built on the original series and its legacy rather than tried to replace it.

Meanwhile, STAR TREK VI saw the return of Nick Meyer to the fold, complete with all the magic he had brought in his two prior outings. To many who hated V, like my wife, VI should have been subtitled THE APOLOGY. It was a near-perfect way for the original crew to go out.

My wife and I had, by the way, initially bonded over our mutual love of DOCTOR WHO and STAR TREK. When we married in 1991, we nearly missed our own reception due to a STAR TREK marathon on TV with classic episodes of both series hosted by some of the actors. Although I had attended a few STAR TREK conventions before, we began attending more often after we got married, eventually seeing and/or meeting just about the entire original cast except for Shatner and Nimoy and most of the NEXT GEN cast as well. 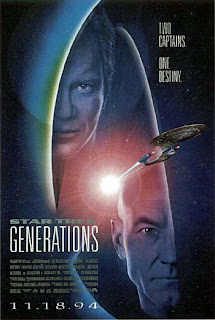 Too much of a good thing never being enough, Paramount surprisingly greenlit a spinoff TREK series, DEEP SPACE NINE. Starring Avery Brooks and nana Visitor, DS9 would turn out to be the most cerebral of the shows as well as featuring the most consistently impressive characterizations and performances, all to the backdrop of individual plots in a complex socio-political running context. Some fans didn't like it because of that.

The NEXT GEN cast moved on to their own big screen franchise, starting with GENERATIONS which featured Shatner and offered cameos from TOS stars James Doohan and Walter Koenig.

STAR TREK: VOYAGER then came along, offering the first female Captain, caught in a mutiny and then trapped in a galaxy far, far away, forced to team with the mutineers for their own safety as they tried to get back home. Although the concept had more than a touch of Irwin Allen, Kate Mulgrew's career-defining performance made everyone forget the debacle that was MRS COLUMBO. 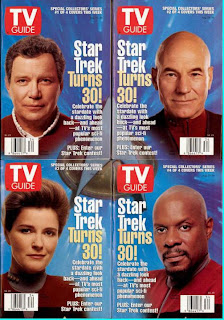 Meanwhile, the cottage industries soared with scores of STAR TREK books and novels coming out ever year, many of them ending up on our shelves here at Booksteve's Library. Shatner and Nimoy had books out as did James Doohan, Nichelle Nichols and others. The later casts started hitting the convention circuit early and the fans embraced them every one.

STAR TREK: ENTERPRISE came along as a prequel series. Although not as popular as its predecessors, it was still quite well-done. Once again, the buzz was that STAR TREK had finally run its course.

But then there was STAR TREK THE NEW VOYAGES, the impressive as all get out fan films that debuted on the Net, many of which featured writers and actors from the original series. For the cognoscenti, that series and various Internet sites of varying quality took the place of the fan gatherings and even the conventions which largely faded out or folded into general pop culture cons.

And then came the big screen reboot and STAR TREK was hot again, with the now ancient Leonard Nimoy and all. Next up, the new STAR TREK II. It's been 46 years today. 46 years of intelligent science-fiction exploring the human condition. 46 years of memorable characters who have become old friends. 46 years of memories both of the series and the moments it led to in my own life. 46 years...and it's still going where no man has gone before. STAR TREK, the concept, has proven to be bigger than the series itself--any of them--bigger than the cast or the characters or the ships and even bigger than its creator. It's been 46 years today and I'm happy to say, as we all said back in the 1970's, STAR TREK LIVES! 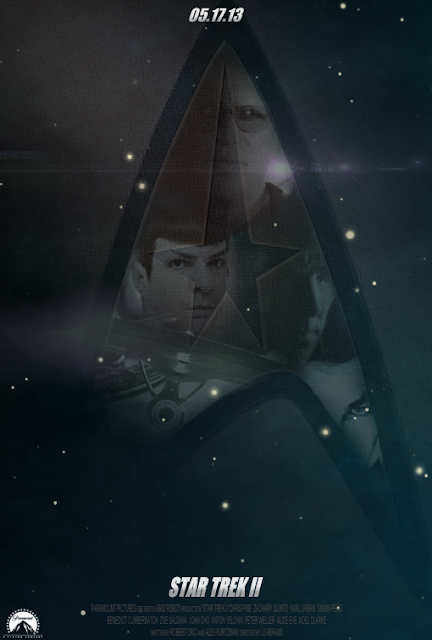