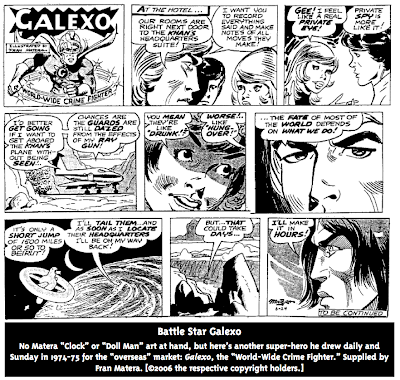 Thanks to FB friend Marc Miyake for pointing me towards the above GALEXO strip reprinted several years ago in an issue of ALTER EGO I didn't have. Once Marc got wind of that, I tracked down which issue had the Fran Matera interview and purchased the digital copy (issue 59 by the way. A VERY good issue. Sorry I missed it new.)

I have long suspected that our info that artist Fran Matera took over the BATMAN newspaper strip when Galexo was introduced (Type in "Galexo" in the above search box to get up to speed if you're confusicated.) might be incorrect, if only because every example of Matera's art I saw from before or after that period was much better than those strips in question.

What it appears now is that the syndicate got someone to hack out the strips at first, DC eventually took issue with the continued use of Bruce and Dick and therefore renamed the strip itself after their replacement hero, bringing in Matera at that point to actually do (and sign) both dailies and Sundays "for the overseas market." No one ever seems to know what exactly that means. Where did these strips see print? If I'm correct, the oft-stated "fact" that the BATMAN strip limped on until 1974 is probably false, with the strip bering entirely replaced by GALEXO possibly as early as late 1972.

I still want to see more!! Anyone? Surely we can rally support for an archival collection of GALEXO?

Posted by Booksteve at 3:16 PM