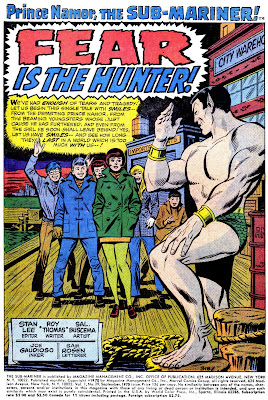 Around this time in 1970, Marvel's coloring took what I consider a turn for the worse. As colorists weren't generally credited in those days, I'm not sure who to blame but the deep, solid blues, reds, yellows and greens look nothing to me like Stan Goldberg's dingier but nostalgic palate from earlier years.

A not bad--not special page here, again credited to Sal Buscema but somehow the Subby figure looks like it may have been redrawn or retouched. Maybe not but reminds me a bit of Frank Springer.

But red, Crisis-like skies, purple clouds, blue hair and green water...and then there's that giant yellow text box drawing your eye right to it. I'm afraid the coloring ruins the overall effect for me on this one.
Posted by Booksteve at 2:09 AM