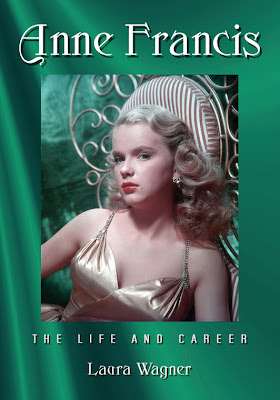 Today is the late Anne Francis’s birthday! What better day then for me to post my review of author Laura Wagner’s new book, ANNE FRANCIS?

The usual disclaimer: the author is one of my Facebook friends but I had nothing whatsoever to do with this book and, my loss I’m sure, we don’t even know each other that well.

I have been a fan of Ms. Francis since the days of HONEY WEST or, in my case, the Saturday afternoon reruns of HONEY WEST that popped up frequently on local TV stations in the late sixties and early seventies. Thus it was that I was already quite familiar with the actress when she started turning up with some frequency in TV movies and episodic television when I was a teenager. What I didn’t know about Anne Francis, however, could fill a book: this one, for example.

Early on, Ms. Wagner laments that all the average person seems to think of when they think of the late actress is her somewhat iconic role in the classic 1956 sci-fi movie FORBIDDEN PLANET. I was surprised to read that but recent renewed interest in HONEY WEST due to TV showings, DVD’s and a new comic book series have surely added that character back to Anne’s memory.

Still…there was much more. Did you know, for instance, that Anne Francis started out as a child star? I didn’t. Do you remember her when you think of such classics as BAD DAY AT BLACK ROCK or THE BLACKBOARD JUNGLE? I don’t. In fact, Anne’s career, which wisely takes precedence in the telling here, is in itself the story of a smart, beautiful, versatile and 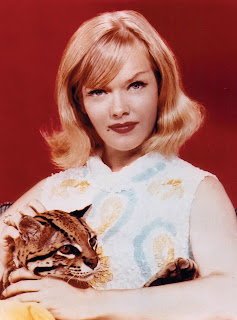 impressive actress that Hollywood just never seemed to figure out how to properly handle.

Tiny roles in big films like FUNNY GIRL, bigger roles in films comparatively no one saw. That was her career for years, with her most satisfying work being on television. It’s interesting to note that the one time they got it right--with Anne as the iconic, independent, liberated, quirky and charismatic HONEY WEST--they canceled the role after but a single season, allegedly because they could import Mrs. Peel for less money. Sigh.

But Anne was rarely idle and became a constant TV presence in network series like BANACEK, WONDER WOMAN (the episode with Christa Helm), FANTASY ISLAND and HAWAII 5-0, all the way up to NASH BRIDGES, CONAN, HOME IMPROVEMENT and WITHOUT A TRACE.

The actress’s personal life is presented throughout the book in a matter-of-fact way without rumors or gossip. Unlike some stars, Anne didn’t define herself through her acting but through her family. There really just weren’t any scandals. She seems to have had a fairly normal life. But then, in the main, ANNE FRANCIS goes on to do just the opposite, in fact helping the reader to define this fascinating actress by her career.

A large portion of the book deals with her film and TV appearances, each listing giving just enough info to make it interesting and enough behind-the-scenes glimpses to satisfy those who like that sort of thing…and I do.

A wealth of marvelous stills and photos fill out Laura Wagner’s ANNE FRANCIS, in the end a most enjoyable read about a lovely woman I now feel I know a little better than I did before.

Posted by Booksteve at 9:00 AM