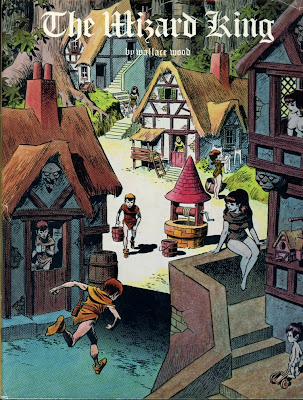 Here's an interesting artifact. Proof that I was blogging long before there were actually blogs! I have no idea what I wrote this piece for but I found it in a notebook amidst other pieces dated 1987 and 1988. Looks like I skipped around throughout the notebook so I'm not sure when this piece was actually done. It's a pretty basic look at the early days of what we now know as the graphic novel just over two decades ago but I believe it's pretty accurate. Based on the final line, I'd have to say that my ultimate conclusion was correct. Waldenbooks pioneered carrying graphic novels and was, I believe, the first to give them their own section. Or perhaps that was just me in my ownWaldenbooks. Don't remember if that was corporate policy or just my own. Anyway, at this point, you won't find a chain bookstore that doesn't have a graphic novel section...and usually a separate one for Manga (a trend I missed completely in this piece). Anyway, here it is...in all its late eighties glory:
THE COMING OF THE GRAPHIC NOVEL by Steven Thompson

Harold Robbins’s sexy potboilers can certainly be described as “graphic” novels but they definitely are not “graphic novels.” A working definition of a graphic novel might be: a hardbound or paperbound book featuring a story told entirely by the integration of words and pictures. As I see it, it is also the next step on the evolutionary ladder for the lowly comic book.

The concept of the true graphic novel has long been discussed, possibly inspired by the widespread acceptance in Japan and parts of Europe of comics bound and marketed in a more permanent form. 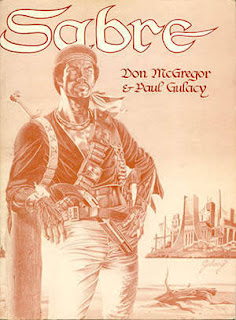 In America, other than a few earlier experimental pieces, the late seventies brought the earliest attempts at true graphic novels—THE KING OF THE WORLD, SABRE and A CONTRACT WITH GOD, all of which debuted in 1978.

THE KING OF THE WORLD by Wallace Wood was originally self-published in black and white in hardcover. Based on a longtime pet project of the legendary comics artist, it offered a clever Tolkienesque quest saga beautifully drawn and told with humor and more than a dash of sexuality. It was followed by a lesser sequel, ODKIN—SON OF ODKIN. Due to its creator’s untimely illness and later suicide, a planned third volume remained unfinished and unreleased.

SABRE was an exquisitely drawn sci-fi tale by writer Don McGregor and artist Paul Gulacy with a decided philosophical bent. It was also released originally in black and white. 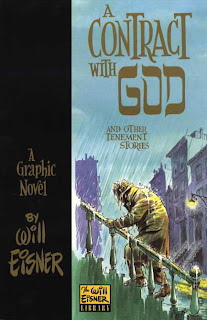 Will Eisner, creator of THE SPIRIT before World War II, had been a vocal proponent of the graphic novel concept for some time. His A CONTRACT WITH GOD AND OTHER TENEMENT STORIES was in a more traditional book size than the other two. Also black and white, it dealt with a number of Jewish families in 1930’s New York. No elves, no post-apocalyptic warriors. It had sex but it wasn’t sexy, it had violence but it was realistic and non-judgmental. Eisner’s was a truly “adult” graphic novel. A young reader would have little to no interest in it at all.

Eventually, Marvel Comics, the kings of the comic industry, committed itself to a regular series of color graphic novels. After a fairly impressive beginning, the series settled into what often seemed like little more than a priced up version of the company’s regular comic books. Only the occasional title was worthy of the new format.

Rival DC Comics took even more tentative steps, their first graphic novels being, in fact, adaptations of previously published science-fiction and fantasy stories. Then DC stumbled onto a variation in the format that worked—repackagings. Their revisionist version of Batman by Frank Miller entitled THE DARK KNIGHT RETURNS was originally published as a 4-issue mini-series. It was then repackaged as a phenomenally successful hardcover and softcover book.

Since Dickens, Conan Doyle and many other now-classic authors originally had their work serialized in magazines prior to having them collected in more permanent book format, the concept is not new. It was, however, a revelation to comics publishers. Currently RONIN (originally a 6-issue series) and WATCHMEN (originally a 12-issue series) are both in release. Both are titles that tell one single, cohesive story and prime examples of comics that work even better as graphic novels.

WATCHMEN especially, although already optioned for a film, has been called the single best use of the comics format to date, integrating as it does words, pictures, imagery and analogy as no simple monthly comic book has done before or since. 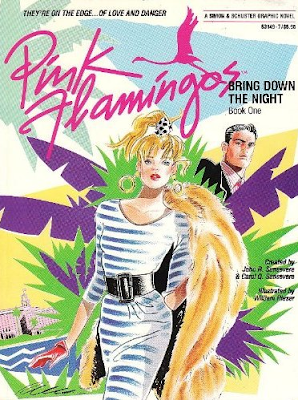 While the mainstream comics publishers were flirting with the graphic novel concept, other, non-comics publishers were getting involved. Donning Press has repackaged ELFQUEST, the phenomenally successful black and white independent fantasy comic book, in four big-selling trade paperbacks and actually has gotten them carried in real world bookstores. Donning has since gone on to publish original graphic novels as well as more repackaging of independent titles.

Many actual independent comics publishers have come out with their own graphic novels, too. Eclipse has THE ROCKETEER, First has TIME SQUARED and Comico has GRENDEL.

More recently Simon and Schuster, one of THE biggest mainstream publishers, has gotten into the act with their original graphic novel entitled PINK FLAMINGOS, a full-color story of an all-girl rock band. Prominently labeled on its cover, “A Simon and Schuster Graphic Novel,” PINK FLAMINGOS sadly isn’t very good but it shows that the company has liked what it’s seen and is willing to support the format. Others among the major book publishers are expected to follow quickly.

At this moment in time, the issue seems to be with the bookstores themselves. The bookstores simply do not know what to make of graphic novels. If they choose to carry any at all, they’re usually shelved automatically in the Humor or Science-Fiction sections, no matter what their content. With the market expanding and the public acceptance of the format, I honestly think it’s not too far down the line when bookstores may actually have to offer an actual graphic novel section!

Posted by Booksteve at 7:19 PM