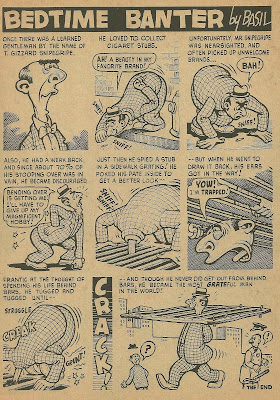 Whenever I mention to folks that Martin Goodman was still reprinting by then ancient Basil Wolverton stories--along with not quite so old PUSSYCAT tales from the sixties--in his cheap, pulp-paper nudie mags at least a few years into the 1980's, they never seem to believe me! And believe me, in my circles, this kind of thing comes up more often than one might think!
I ripped out the good stuff--oddly enough, the comics to me--so I no longer know the names
of the mags but they were made up of grainy nudes, some of which looked reasonably contemporary but most of which seems to have been taken in the fifties. Not sure where this BEDTIME BANTER strip came from but the only other one I could find in this series was from 1950. Basil's POWERHOUSE PEPPER was also a regular in these reprints as well. The paper was ultra-cheap and after flipping through one, you had to wash your hands. As you can see it yellowed pretty badly also. So basically you had naked ladies, many with hairstyles your mother probably enjoyed and a few with pointless "sexy" captions. A tad more explicit than those you would find in the fifties is this innocuous pose from the reverse of the Wolverton page.

The rest of the mag consisted of panel cartoons, some but not all geared toward adult humor. I'd be willing to bet many of those were also first seen in the Eisenhower or Kennedy administrations. But this was circa 1982 and by then there was just no competing with the gynecological explicitness of HUSTLER and PENTHOUSE. The era of "Tease" was over and the genre left to aficionados who would soon enough rediscover its queen...Miss Bettie Page.
Posted by Booksteve at 5:34 PM