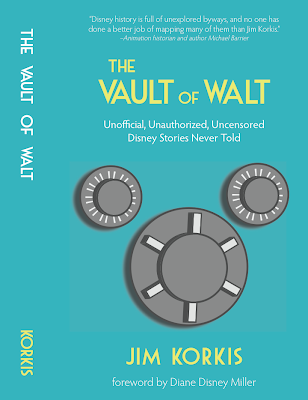 First thing this morning I noticed that Mark Evanier had posted a review of Jim Korkis’ new book, THE VAULT OF WALT. Seeing as how I had just finally finished my review copy of that same book, I purposely did not read Mark’s piece but I have no doubt that it was a recommendation.

Jim Korkis has been one of my favorite writers on animation for literally decades now. He is known throughout the world for his expertise on all things Disney and Disney fans everywhere should rejoice that he is sharing these episodic and anecdotal historical stories with us!

First of all, THE VAULT OF WALT is, in spite of what its title may imply, NOT about the scandals often linked these days to Disney. No matter how hard you look here, you will not find the Satan-worshipping, Nazi-sympathizing, anti-Semitic child molesting, deep frozen Disney who lurks in the dark recesses of Disney fandom on the Net. Nor will you find the sainted artistic genius that never made a misstep and was beloved by all who knew him. No, Korkis introduces us in snippets to the puzzle pieces that end up showing the reader a very real version of “Uncle Walt.”

The Disney in this book is a talented and creative animator and producer with a very good business sense. He loved children and legitimately wanted to entertain them but had a very good understanding of how to make a profit doing so.

In the book, you’ll find out the truth about Walt’s FBI connection, his membership in the DeMolay organization and his very memorable 30th wedding anniversary. Even though I have never had the pleasure of visiting any of the Disney theme parks, the many segments offering background and behind-the-scenes stories about Disneyland and Epcot are informative and interesting. For me, though, the best parts were the looks at Disney’s personal involvement with a number of films from THE THREE LITTLE PIGS up through BLACKBEARD’S GHOST and even, unexpectedly, 1970’s THE ARISTOCATS. My favorite piece is about the notorious Atlanta premiere of SONG OF THE SOUTH in which the African-American actors, while consistently praised, were not even allowed in the theater…or much of downtown Atlanta in fact! You’ll find characters such as Ward Kimball, Salvador Dali, Chuck Jones, Zorro, a cigarette smoking chimp and the equally interesting Disney family themselves including Walt’s wife and daughters.

Much of Korkis’ book had originally been written as columns so one can easily skip around and always find something new and fascinating. The style is breezy but always informative with the author making even the most minute events feel important to the reader. For fans of today’s Disney mega-conglomerate, there’s little here to interest you. If, however, you’re one of the millions who grew up with Uncle Walt, then THE VAULT OF WALT offers some intriguing, insightful and incisive portraits of the real man, the world in which he lived…and the world he himself created.

What are you waiting for? You can order your copy of THE VAULT OF WALT by Jim Korkis below. Me? I’m going to go read what Mark said about it now.