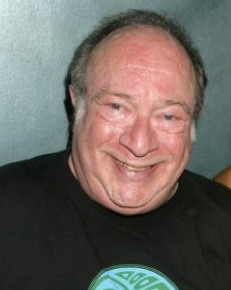 They were never available in stores but the Kip Tapes were an underground hit nonetheless. Kip King died in July of this year after a long series of health issues. The week that he died, I had just gotten hold of the Kip Tapes.

Kip King was the quintessential comedian’s comedian. Although never well known to the general public, he appeared in scores of television series from the mid-fifties on and in films, especially with his son, Chris Kattan, right up until he began his long hospital stay. He was a respected teacher, mentor to many over the years and friend to a host of other well-known comic performers. Comedian/actor Taylor Negron, in speaking of Kip’s passing, noted, “We all must be funnier now to make up for the loss.”

Actress Laraine Newman, the funniest of the original Not Ready For Primetime Players ladies, was not in the Groundlings at the same time as Kip but remembers him well. Laraine wrote that “…somewhat recently, I saw him and Sandy Helberg do their Mr. Bojangles routine, a bit that had me laughing so hard I almost suffocated. There were two things going on at the same time that were equally powerful. Sandy's ancient and palsied tap dancer and Kip's sweet, sincere expression as he sang the song. It was just so wrong and so devilish. There was a wink in his eye, to be sure, but that just added to the lightness of his touch when doing this particular thing. It was probably the least broad thing I'd ever seen him do.”

Laraine’s sister, musician, writer and TV producer Tracy Newman, had been Kip’s co-conspirator on the Kip Tapes. Tracy recalled for me how they came about in the first place. “It was approximately 1982. Around that time, Kip worked for Jesse Jackson at Operation Push. He was on the phone in a “boiler room” early each morning, selling advertising space for black periodicals to businesses in the south. He had a script to follow, but of course he veered from it and went off on tangents. Kip was a New York Jew, but for this job, he was usually a black man named Dr. Richard Anderson. When John Paragon (later a fellow Groundling) started working there, Kip was his mentor because Kip was so successful at the job. John put a cassette tape recorder on Kip’s desk and taped many of his conversations, all of which were simply hilarious. “The black community is like the sky... it’s all around you.” After I heard these rough tapes, I invited Kip to my house every Saturday for several months to place crank phone calls which I recorded properly... I bugged my phone and circled ads in various free papers for Kip to answer. The ads were things like “Last Chance For a Mule,” or “Found Dirt Bike,” or “Get what you want when you want it.” Kip would dial the number and depending on the sound of the voice answering on the other end, he would decide who he was. Like when he called Brentwood (LA) answering an ad seeking a fourth for bridge — the woman who picked up the phone had a slight southern accent, so he became a black man from South Central LA, named Dwight Fiscuss. The minute she heard his voice, you knew she didn’t want him playing cards in her home. I recorded many of these calls, then went into a studio and edited them down to six of my favorites. We wanted to put them out on a record, but we needed the “victims” to sign releases. Neither Kip nor I had the nerve to call them and tell them that they were on the other end of a crank call. So, the tapes became kind of an underground treasure. Very funny but maybe too risky to sell. The six calls are: Last Chance For a Mule, Bridge, Get What You Want, Free Cat, Ski Suit and Dirt Bike.”

Laraine added that she heard the tapes when her sister would play them for her. She said that what she really remembers is Kip’s laugh. “There will never be a laugh like that again.”