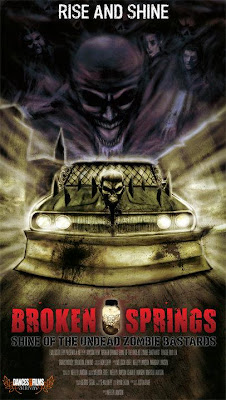 Some time ago, I wrote about an upcoming low budget independent zombie movie called BROKEN SPRINGS. I even ran the trailer. Technically, it's still upcoming. It has however, played a few film festivals (under a slightly expanded title) and tonight, it will finally premiere in the area where it was originally shot.
Quoting from the film's Facebook page: Broken Springs: Shine of the Undead Zombie Bastards will make it's East Tennessee Premiere Oct. 30th 2010 7PM at the Kingsport Renaissance Center as part of the Southern Appalachia International Film Festival or SOAPIFF. It will be shown almost two years to the day of when we held our auditions at the Renaissance Center.
From Wikipedia: Broken Springs is an independent film written, directed and edited by Virginia native Neeley Lawson. It stars Teague Quillen, Jake Lawson and Shannon Wallen. The movie centers on three high schoolers whose world is turned upside down by tainted moonshine which turns everyone who drinks it into a flesh eating zombie. It does not take long for the whole town to be overrun by hungry cannibal zombies.
The only person involved in BROKEN SPRINGS that any of you are likely to have heard of is Shannon Wallen, arguably the world's biggest fan of modern horror movies and himself a rather infamous TV horror movie host from the area where BROKEN SPRINGS was shot. Wallen plays "Billy Jack," (no relation) the moonshiner whose tainted moonshine instigates the plot. From what I understand, he also worked behind the scenes on the film, perhaps as Assistant Director. Previously, comic book fan Wallen also appeared on the cover of an unrelated zombie comic as a victim! Here's a link to my original report which shows that comic as well as features the trailer.
http://booksteveslibrary.blogspot.com/2009/10/broken-springs-trailer.html
I won't be at the premiere tonight (although I know some who probably will), and I'm not even sure why I care about this cheap little film that I will probably never even get to see. Maybe it's the "Hey, let's put on a show" attitude. Maybe it's because I know people who know people who were involved in its making. Maybe I just appreciate the fact that someone who wants to make a movie on any scale can stick with it through thick and thin and somehow get it to the point where--good or bad--it unreels in a theater...like BROKEN SPRINGS does tonight in Tennessee.
Posted by Booksteve at 2:18 PM