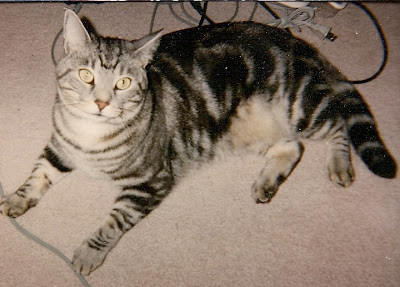 Our cat Chauncey seems to be slowly dying.
The story we tell is that our nearly 18 year old cat's full name is "Geoffery Chauncer Thompson", so-called because he has kind of a "Canterbury" Tale...whatever that is. (You don't need to tell me it was "Chaucer," not "Chauncer" either. I worked in a bookstore for 27 years. I know this in spite of the punny name story) In reality, when we received him as a post-miscarriage gift back in 1992, we named him after the running gag character on ROCKY AND BULLWINKLE who was always told, "There's something you don't see every day, Chauncey." He had great big ears as a kitten and, as we often noted, looked an awful lot like an ocelot.
Just since yesterday, he has become lethargic, won't eat and barely sips water. He uncharacteristically allowed himself to be held for a long while this morning but then made his way awkwardly back up to the bathroom where he fluffed up a roll of Charmin and plopped on the plush white carpet and has remained ever since. He seems in no pain at all...simply so very, very tired. So we check on him a lot, tell him we love him and let him sleep.
Chauncey survived a feline leukemia scare early on in which the vet informed us IN THE LOBBY that he could "put him down" that afternoon. We insisted on a second opinion which thankfully showed nothing. The vet was fired for his behavior to us when his own receptionist complained.
As a strictly indoor cat, he scared us on a few occasions when he got out back when we lived out in the suburbs. I once found him hiding behind a thornbush and had to dive into the thorns to grab him. It was worth it.
Overall, he has led a charmed life. When he was first offered to us, I asked the friend who had him what his name was and she said, "His name will be history if you don't take him!" And so it has been in our family.
For now, he's still with us but unless he totally pulls out yet another life at the last minute, I don't think it will be long.
Posted by Booksteve at 8:40 PM