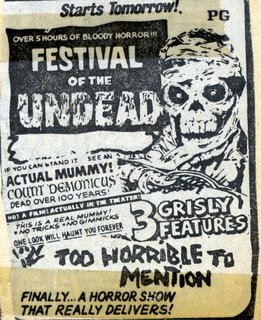 October is my son's favorite month, partially because his birthday is in it but mostly because of Halloween. A self-described "horror nut" he likes good old-fashioned scares like THE BIRDS and certain TWILIGHT ZONE

episodes. He loves GOOSEBUMPS and is just discovering, at age 9, EC Comics. Every year at Halloween, though, he dresses up and we walk down the street about two blocks. After he gets a load of teeth-rotting candy, we scurry back to our porch so he can give out all of his candy to other trick-or-treaters. Not sure how this tradition started but he enjoys it. This month, we won't neglect our usual coverage of comics, TV, etc. but we WILL be concentrating more on horror than usual, starting with these two 1972 ads for a theatrical spookshow that included not only movies but in-theater appearances by the apparently mummified Count Demonicus! Note that the films themselves, described as "too horrible to mention" in one ad, are actually all old and fairly tame Vincent Price vehicles! It's likely that as the show traveled from town to town, different features were used as available in individual theaters.
Posted by Booksteve at 11:10 AM