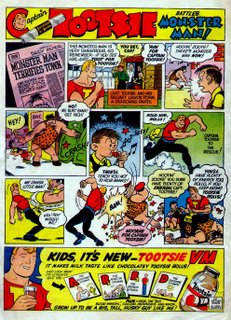 Okay, so it isn't really scary but it IS a MONSTER man after all! And it IS way cool! CAPTAIN TOOTSIE was a famous advertising comic strip that ran in comic books and even newspapers back in the forties all shilling for Tootsie Rolls. Although most of the examples I've seen have been signed and this one, from 1944, isn't, it nevertheless appears to be the work of CAPTAIN MARVEL's pappy, C.C. Beck. Beck did many of these strips which, ironically, appeared regularly in SUPERMAN and related titles. Clearly done through the auspices of Fawcett Comics, some strips were even credited to Rod Reed or Otto Binder as writer. Of particular note here is the bottom tier touting a Tootsie Roll flavored chocolate milk packed with vitamins! I am totally surprised that someone hasn't revived THAT in these health-conscious food days!
Posted by Booksteve at 6:57 AM