Mark of the Devil 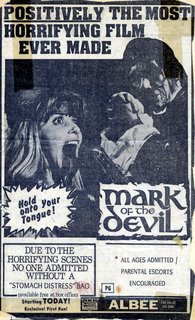 Although not really as graphic as , say THE WIZARD OF GORE or even HOUSE OF 1000 CORPSES, MARK OF THE DEVIL comes by its tagline-"Positively the most horrifying movie ever made!"- naturally. This picture played in the US throughout the early seventies, marketed most often with a "barf bag." The problem is that it isn’t really the simple, sleazy exploitation picture it was played up to be. It stars Herbert Lom (Dreyfyus from the PINK PANTHER series) as a witchfinder similar to Vincent Price’s Matthew Hopkins in THE CONQUERER WORM and weasly cult actor Udo Kier (from Andy Warhol’s horror films) as his apprentice. MARK OF THE DEVIL tells a partly historically accurate tale of supposedly religious men who allowed themselves to be corrupted by the power given them by the church and ended up robbing, torturing and destroying people’s lives. Veteran character actor Reggie Nalder who had an incredibly bizarre career path that included Hitchcock, Fellini and the porn comedy DRACULA SUCKS also appears. The torture sequences are quite graphic and, especially in context, very disturbing but would be mere foreplay to today’s seasoned gorehounds. It was followed by at least two unmemorable "in name only" sequels. MARK OF THE DEVIL works more nowadays as a cheap but scary look at a real historical time when corrupt officials abused their power to maintain control over innocent people…and that really hasn’t changed much. Now THAT’S really scary!
Posted by Booksteve at 12:06 AM