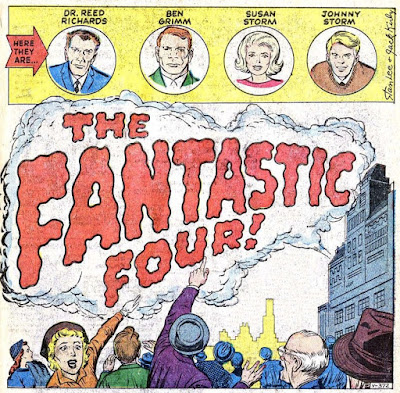 Marvel has announced their plans to completely eliminate any FANTASTIC FOUR titles from their lineup for the foreseeable future. While I don't believe for a second that this ban will last, I do think it's a good time to go back and take a look at the splash pages and splash panels of the original series.

The above, for example. The very first FF splash from 1961. A Kirby crowd scene typical at the time of so many  Kirby crowds pointing at monsters in the "Atlas" comics. But here, just words. It intrigues properly, inviting the reader to come meet the four folks pictured above. With both Reed and Ben being WWII veterans, I'd peg them here to be in their mid-40s and they look it. Sue seems mature enough to be in her 30s and Johnny perhaps 16.

Below--Which came first? The splash or the now oh-so-iconic cover? The giant monster again was business as usual for jack at that time but his early, wispy Human Torch was new. Sue seems to be Fay Wray to the monster's Kong and Reed and Ben are peripheral. 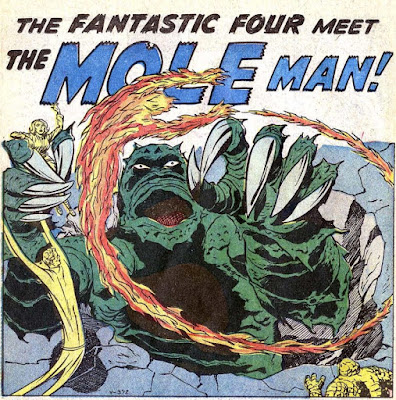 The final splash in issue one captures Sue Storm halfway between visible and invisible, with yet another giant monster in the back and the first splash panel appearance of Stan Lee's dialogue. Overall, it's a good issue but reading it today it all seems so alien to what the FF would become. 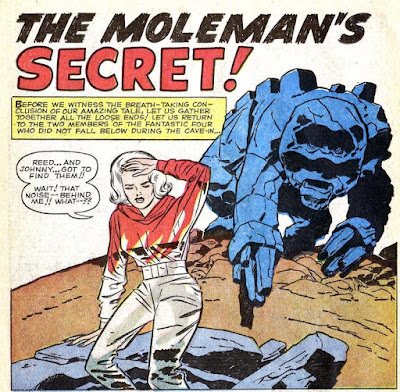 Posted by Booksteve at 6:08 PM