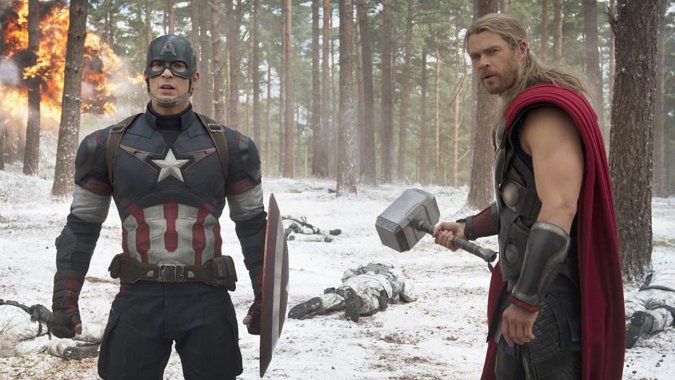 Positives:
These actors fit into these characters like comfortable clothes by this point. Has any actor ever looked more heroic than Chris Evans as Captain America? And Downey is such a treat to watch in anything these days. Please, please, please let him keep his demons in check!

I was worried that Black Widow might get less screen time since actress Scarlett Johansson was pregnant when shooting the film. But with judicious spfx and camerawork, she comes across better than she did in previous appearances.

Jeremy Renner as Hawkeye--after being mind-controlled through much of the previous picture, gets some surprisingly good scenes, lines and even some unexpected character development he never got in the comics!

The Vision. Close to perfection as one of my all-time favorite characters.

I even liked Scarlet Witch and Quicksilver when I didn't expect i would.

Lots of big noisy action throughout but I found the opening sequence storming Baron Strucker's stronghold to be the best and most enjoyable. Also the most comics-like.

I didn't like Ultron. James Spader has been one of my very favorite actors in recent years but I thought he played this--presumably as directed by Whedon--all wrong.

Too many loose ends. I know they were setting up multiple other movies but it would have been nice to have more of them tied up in THIS one.

Apparently the backgrounds of Pietro and Wanda have been stripped--a major bone of contention to my son.

The climactic "plot" is almost TOO implausible and the deus ex machina ending was set up and fairly well expected by the time it happened.

The death of one of the heroes. Apparently that occurrence had been widely leaked ages ago according to my son but I hadn't seen it.