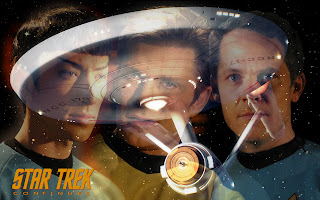 Considering how big a STAR TREK fan I've been for decades (see my high school journal blogs), it's surprising I haven't written more about its various incarnations here. The recent second Abrams feature was the first Trek-related anything I haven't seen since the time VOYAGER and DEEP SPACE NINE lost their local affiliates back in the nineties!

Around the time I was staying home from the theater last month, however, I discovered STAR TREK CONTINUES.

There have been many STAR TREK fan projects in recent years and most of them do an amazing job as only true OCD Trekkers and Trekkies could do. Many have gone so far as to get original cast members to participate in one capacity or another. I should probably write about them someday.

But not today. Let's not beat around the bush. STAR TREK CONTINUES is the one that finally gets it ALL right!

The first of many promised episodes, "Pilgrim of Eternity" is an actual sequel to the original series second season episode entitled "Who Mourns for Adonais?" They've gone so far as to bring back actor Michael Forest from the original episode as the now suddenly aged God, Apollo. Forest's real-life spouse, Diana Hale, herself a veteran of 7 decades in show business appears as well.

The seemingly required "real" cast member appearance is provided subtly by Marina Sirtis, NEXT GEN's Counselor Troi, taking the place of the late Majel Barrett-Roddenberry as the voice of the Enterprise computer.

Stunt-casting aside, whether a project like this really works depends on the regular crew and they are almost to a man letter-perfect! Scotty is played by the original Scotty's son, Chris, who manages to channel his father eerily at times in voice and mannerisms. Sulu is played by MYTHBUSTERS co-star Grant Imahara. My wife is a big MYTHBUSTERS fan and shouted out his name as soon as Sulu appears in the episode! Mr. Spock, often a tricky casting point in these things, is played logically by Todd Haberkorn and the rest of the cast fill their roles, if anything, more recognizably than their big-screen, big-budget Abrams counterparts! There's even a brand-new female doctor who's garnered much fan attention without being a shoehorned "Mary Sue" character. 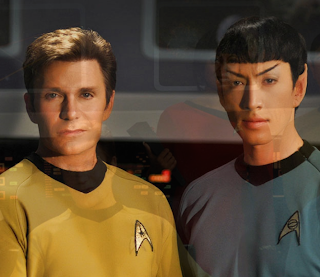 The guiding light behind this project, though, is Vic Mignogna, a man who has mainly made his living from dubbing anime into English according to IMDB. Vic is Executive Producer, Director and even Captain Kirk! Deftly managing to avoid making his performance a William Shatner imitation, Vic nonetheless portrays the Captain Kirk we all know with great aplomb. It's obvious he's studied not the actor but the character. In certain light, he even looks remarkably like the young Kirk!

Speaking of lighting, Vic has even made sure that the incredibly replicated sets are lit throughout exactly the way the series was lit, giving the whole thing a nostalgic, technically perfect, almost time travel feel!

The story itself is a smart one, very much in the style of the sixties series, complete with a most satisfying ending. It's only months after the original episode and the Enterprise runs into Apollo yet again, now vastly aged. After his mate dies, Kirk cautiously allows his one-time enemy to be nursed back to health over the growing objections and fears of some crew members. Old-time character actors are the best and Forest proves that here with a trickier performance even better than his sometimes over-the-top original.

Overall, to any real STAR TREK fan, there is quite literally NOTHING here not to like! Paramount allows these types of projects only because they are not done for profit but, of course, they inevitably DO cost a lot. Mignogna is said to have standing sets and willing actors and more will be forthcoming. In the meantime, the show's website does offer several short vignettes spotlighting various characters and leading us forward from the final moments of the last episode of the original STAR TREK.

Like we said back in the seventies, STAR TREK LIVES! Even better, though, STAR TREK CONTINUES!

Go here and enjoy--- http://www.startrekcontinues.com You can also join the show's active Facebook fan page to keep up on new developments! 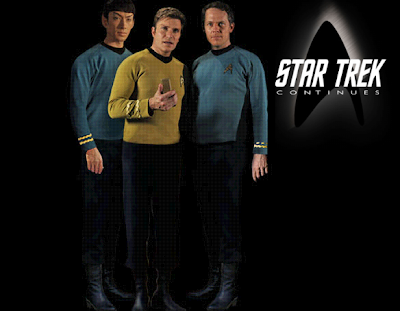 Posted by Booksteve at 7:56 AM