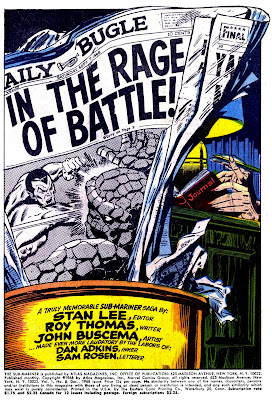 It's obvious that John Buscema, generally a pretty traditional artist, is continuing to have fun with the splash page layouts. I'd guess we have Jim Steranko's innovations of then-recent years to thank for that. This issue re-introduced Namor's Golden Age co-star, Betty Dean--hands seen here--who would be put to good use in a couple of years by her creator, Bill Everett. Roy Thomas would continue to reintoduce forties characters both at Marvel and later DC throughout his career and then write about them all in ALTER EGO! Buscema, later the FANTASTIC FOUR artist of the seventies was having an early go at the Thing here and didn't always get him right. That would change soon enough.
Posted by Booksteve at 12:04 AM