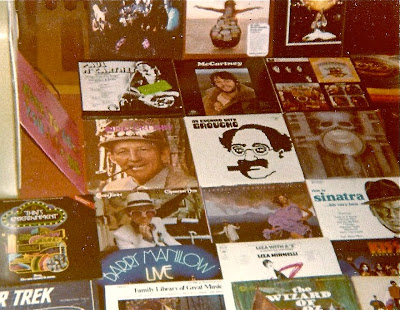 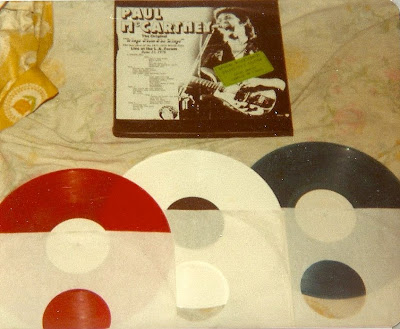 Here's a look at just a small portion of my record collection circa 1980. Some CSNY, Some Neil, some Tull, a little ELO and even ELP. Elton. The Captain and Tennille, McCartney, soundtracks, the Rutles, Groucho, Frank and Bing! Talk about eclectic!
Seen below is more detail of the WINGS FROM THE WINGS bootleg, a Bicentennial-themed bootleg 3 record set of Paul McCartney's first American tour with Wings during 1976, the Bicentennial year. The original price was $17.76. When I sold it just a few years later, I got sixty bucks for it.
Unfortunately, I've had to sell many of these in recent years as well as many other cool finds I'd picked up over the years. I still have some although I'll be going through them seeing what I can sell here in a day or so, also.
Posted by Booksteve at 2:34 PM