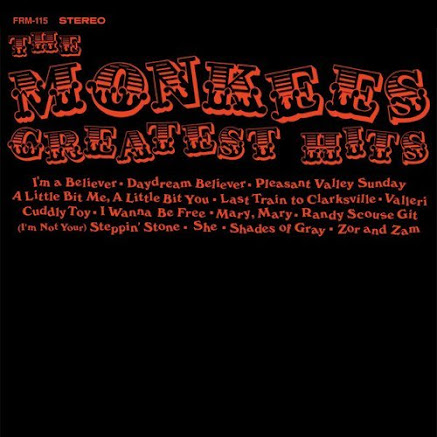 I spent the 1970s worshipping the Beatles but in the '60s, they were just background noise to my true jam--the Monkees. The LP above was one of the very first LPs I ever bought, in 1969 when I first started paying real attention to music. By then, I'd already been a Monkees fan for three years! I remember watching their very earliest episodes and their final 2nd season episode so I most likely watched most in-between as well.
I caught them on LAUGH-IN, JOHNNY CASH, GLEN CAMPBELL, and other TV shows, as well as their own later Saturday afternoon reruns (with newer songs like the Davy-sung "I Never Thought it Peculiar" edited in). I loved their commercials for Kool-Aid with Bugs Bunny or for Kelloggs. I did, however, miss their one and only TV special in 1968 and I didn't even find out they HAD a feature film until maybe a full decade later. 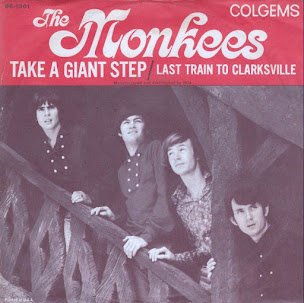 This was the first Monkees single I bought, for 29 cents used, picture sleeve and all, at a local drugstore. I'd lie on my bed in the dark playing it at full volume on my still tiny mono record player and wave a flashlight all around the ceiling for a mock-psychedelic strobe effect.
The show was silly but funny but the music was what I loved most. Micky was my favorite. I still think he  had one of THE best pop voices of the 1960s. Davy was next for me back then, although everything I've read in years since indicates he was never anything like his charmingly innocent nice-guy character. Peter reportedly was, though--a mellow hippie who often skipped clothes at his house, where he allowed scores of people he barely knew to crash on a regular basis, often all at the same time.
But as time went on, Michael Nesmith became my favorite Monkee. Goofy wool hat aside, he was not only the cool, laconic leader in the scripts but he was the one who wrote and played his own songs, and championed the three strangers he'd been connected to to do the same as they wished. Eventually, he won out, proving himself in real life to be much tougher and more astute than his TV character.
The Monkees, from the beginning, were several different "bands." Davy's songs were, with a few very notable pop exceptions, almost mainstream versions of English music hall-style show tunes. His background. Peter's few major contributions tended to be folkier. Micky was given all the potential hits...and Mike was busy introducing the music world to what we now think of as country-rock.
One could easily create--and trust me, I have--a mix-CD of nothing but amazing Papa Nez songs. And if one goes beyond the Monkees, one could do several such mix-CDs. I remember the first time I heard "Joanne," his first post-Monkees solo hit record, on the radio. I recognized his voice, of course, and presumed it was a new Monkees song!
My cousin gave me a copy of Mike's first First National Band LP on 8 Track (!) and every single song on it embedded itself in my consciousness to the point where, in recent years, when I've gotten it again (the 8 track tape long gone), I could still sing along.
Recently I listened to Mike Nesmith on a 5-year-old episode of GILBERT GOTTFRIED'S AMAZING COLOSSAL PODCAST. It was fun, nostalgic, and fascinating.
I never got to see any of the Monkees live, in spite of the many increased chances since the 1980s but, like the Beatles, they've stayed with me all along through their reunion albums, books, their second TV special, various documentaries and talk show appearances, and, in more recent years, YouTube, Twitter, and Facebook. I even contributed to one book about the Monkees.
I'm not going to recap Mike Nesmith's life and recent death here. I'm sure you've all seen all the same news stories and articles I have by now. I'm just going to say that while they may have been hired as just actors, they really did become something special--something way more than a real rock group even--to us, and more importantly, to each other.
R.I.P. Michael Nesmith.
Posted by Booksteve at 10:31 PM