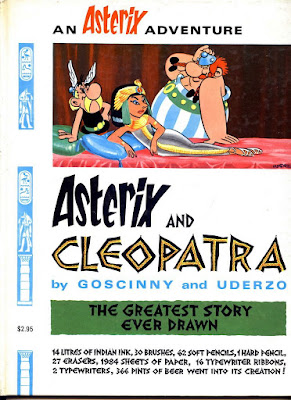 Italian-born Albert Uderzo has died in France at age 92, for more than half a century the artist of the most popular comic strip in the world. Not a bad legacy. R.I.P.

I don’t recall where I first heard of Asterix but I remember the first time I actually saw a volume was in my high school second year Spanish class. Unfortunately, the ones in the classroom were in French. I loved the artwork by Albert Uderzo, though!

That was in 1974. Not long after that, I found some volumes in English and bought one. Suddenly, Asterix was my new favorite thing! The writing by Rene Goscinny, was exciting and funny (even in translation), the satire pointed, and the artwork unfailingly charming, clever, and cute.

While I was buying up every Asterix book I could find (often erroneously shelved in the Children’s section of bookstores), there was even an attempt in the late 1970s to syndicate the strip in American newspapers, with an all-new translation and art additions. When someone wrote a letter to the local paper complaining that it wasn’t funny, I, myself, wrote a letter defending it. It was canceled anyway. 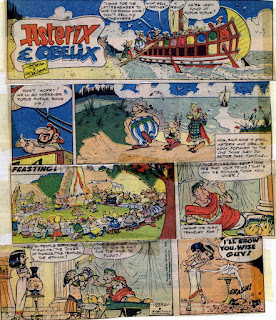 Still to come were the cartoons, the brilliantly made live-action films, the popular video game, and more and more albums, each almost as brilliant as the last.

After Goscinny’s death, Uderzo took on the writing himself without a single misstep. Upon his retirement many years later at age 84, a great search was run for successors and the strip carries on today.

Posted by Booksteve at 7:15 AM