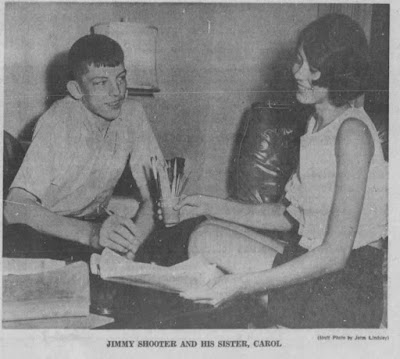 In 1966 I was 7 and 14 year old Jm Shooter was my idol because he was writing comic books! His Legion of Superheroes comics became early favorites as did his other Superman Family stories. Then, as he always said, he left comics to finish school and get a "real job." But then someone lured him back for just one more Legion story...or two. From there, Shooter controversially took over Marvel Comics and, depending on your perspective, either saved the company or drove it into bankruptcy. I met him once--extremely tall!--and he was very nice. But then I get along splendidly with my ex-boss when I'm not working for her. Shooter continued to create and innovate with Valiant and Defiant and beyond and his blogging has highlighted some fascinating bits of comics history from his perspective but he remains a divisive figure to this day. I prefer to remember him like this--a cocky kid who said he could do it...and did!

Posted by Booksteve at 8:03 AM