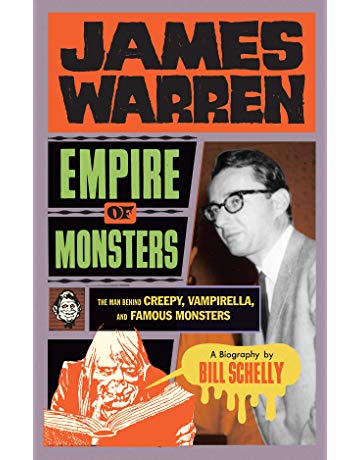 JAMES WARREN: EMPIRE OF MONSTERS is the latest book from award-winning comics historian Bill Schelly and I’ll tell you right up front, it’s another good one.

I didn’t pick up my first issue of FAMOUS MONSTERS OF FILMLAND until 1970, at the ripe old age of 11. I had seen it around, along with CREEPY, EERIE and more recently VAMPIRELLA, but they had always looked to me like grown-up things so I had avoided them.

Suddenly my whole world was changed as I began to discover not just monster movies but the men behind them—the Chaneys, Karloff, Lugosi, Lorre, Rathbone, Carradine, Cushing, and Lee. Not to mention Ray Harryhausen!  FM also introduced me to Forrest J. Ackerman, a man whose influence on pop culture is probably immeasurable…and yet a man whom I NOW know, thanks to this book, doesn’t really get ALL the credit for that.

The biggest contribution Schelly’s book makes is to clarify Jim Warren’s position as far as the Warren mags go, and it’s a lot more substantial than many of us ever knew. Unlike many publishers, Warren was never just a money man. He was very much hands-on for all of his mags, not just hiring the right people (and sometimes the wrong ones) but also adding heavily to the look, feel, design, editorial, and publicity of his own publications. While FJA was most definitely the public face of FM, it turns out that Warren himself was the mag’s heart for much of its run.

And the same can be said for CREEPY and EERIE. Warren is here even given more credit than known before for the creation of Vampirella!

Along with his little-known creative contributions, we also get the story of the man himself. An eccentric enigma by nearly all accounts, we see him rise from a cheesy Hef wannabe in Philadelphia in the 1950s to a successful Manhattan magnate in his own right with a Sopwith Camel airplane in his yard.

With FM, Warren fostered a generation or two of Monster Kids who went on to create our modern movies, books, and TV shows. With CREEPY and EERIE, he revolutionized comics by not only reviving the dreaded horror comics of a decade earlier but making them for adults, without Comics Code interference. With VAMPIRELLA a few years later, he threw sex into the mix, to the particular delight of many young male readers. (One of my own early comics letters was published in an issue of VAMPIRELLA!)

Schelly’s prose is, as always, quite readable, laying out Warren’s story in more or less chronological order, complete with facts, rumors, and gossip from many credited sources, and yet without the elitist attitude many books of this type adopt.

My very first Warren publication, long before my first issue of FAMOUS MONSTERS, was ON THE SCENE: SUPER HEROES, a 1966 BATMAN cash-in mag that reprinted articles about old movie serials like Superman, Batman, and Captain Marvel from Warren’s SCREEN THRILLS ILLUSTRATED. The articles were new to 7-year-old me, though, and stoked my early interest in old movies. That mag is not mentioned here, though.

THE FLINTSTONES AT THE NEW YORK WORLD’S FAIR is another Warren publication I would have liked to have learned more about but it’s only briefly noted by the author in passing. Printed in 1964 and sold at the actual World’s Fair, it was Warren’s only full color comic book and even features a very recognizable cameo of the publisher himself.

But no book of this type can be truly complete, and what IS in this one has dramatically changed my whole way of thinking of Jim Warren, his place in pop history, and even his influence in my own life.

Published by Fantagraphics, JAMES WARREN: EMPIRE OF MONSTERS is another solid, well-researched biography from Bill Schelly. I really can’t wait to see who’s up after this. With the track record Schelly’s established, I’ll definitely be there for his next one.

Booksteve recommends.
Posted by Booksteve at 9:54 AM