About 10 years back, rumors were floating around that Jack Benny, star of stage, screen, and radio, appeared unrecognized in a scene in CASABLANCA, the classic Bogart-Bergman hit from 1942. Seeing as how CASABLANCA has been my favorite picture for decades, I laughed. I looked, though, and was convinced he was NOT in the film. It became like the now legendary "What color is the dress?" thing from a couple years ago. For every person who was sure he wasn't in it, someone else was sure he was.

Tonight, I was talking with publisher, OTR and  film buff, pulp expert, Dachshund dad, and Bronze Age comic book colorist Anthony Tollin, who informed me that the original pressbook for the film actually makes reference to the comedian's appearance.

Something I have access to now that I did NOT a decade back is Newspapers.com. I checked the 1942/1943 papers and found quite a few references to Jack's appearance!

I remain somewhat stunned by the fact that Jack never mentioned it, ever. One would expect he would have milked it for multiple episodes or at the very east mentioned it when Bogart appeared on his radio show or later his TV show. Or maybe in later years when discussing his Hollywood career in interviews.

Tollin says he showed it to Joan Benny, Jack's daughter, and while she had never heard of it from her father, either, she recognized his walk and mannerisms and pronounced that it was, in fact, Jack Benny. In CASABLANCA.

I'm going to concede at this point based on the numerous syndicated and local newspaper pieces but I still can't understand why it didn't become a running gag to tie in with all the other running gags in Jack's repertoire.

Also, I just went through my DVD in slo-mo and still didn't spot anyone I'd feel comfortable saying is Jack Benny. 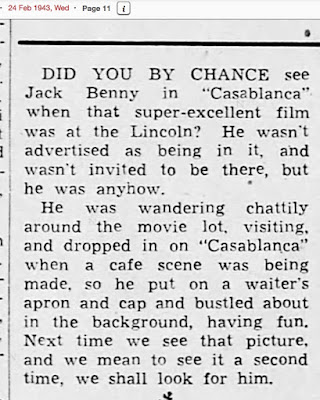 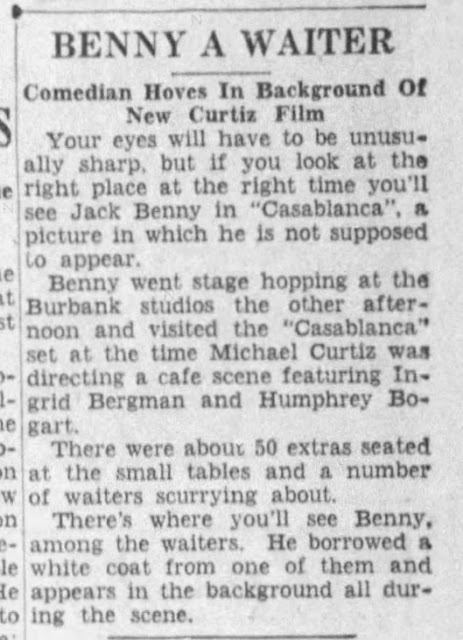 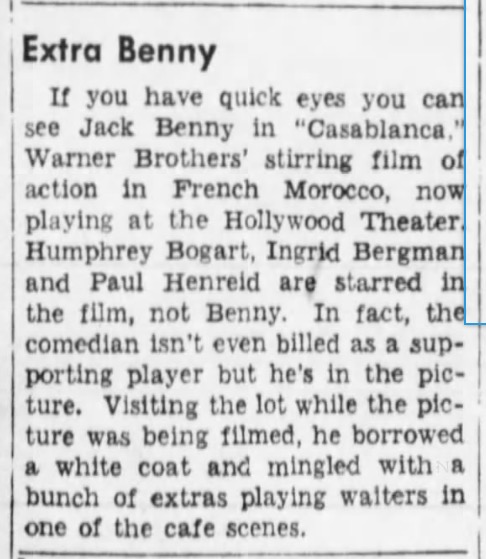 UPDATE: on Facebook, Laura Leibowitz of the International Jack Benny Fan Club points out that the files on the film at USC include a letter from someone asking just where Jack was in the movie. She says it includes a copy of the studio's response indicating that Benny actually does not appear in CASABLANCA!