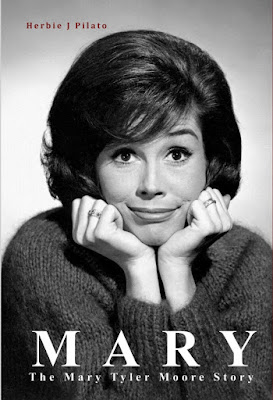 Based on the evidence at hand as well as his previous books on Elizabeth Montgomery, one thing’s certain: When it comes to writing biographies, Herbie J (no period) Pilato is nothing if not thorough! It’s not his fault that after reading Mary, the Mary Tyler Moore Story, I find that I like his subject a bit less coming out than when I went in.

Oh, sure, that world turning-on smile still persists even if Mary herself no longer does. Likewise, my lifelong crush on Laura Petrie and my virtual friendship with Mary Richards hasn’t changed. It’s Mary Tyler Moore herself, not her image, that seems a bit tarnished to me now, and that’s because the author has done such an excellent job in revealing her to be human, with all the foibles and fears and doubts and issues that brings along with it.

Don’t get me wrong. This is not some salacious warts and all bio relishing every little bit of gossip and scandal about the woman. As with Montgomery, it’s clear that Herbie is enamored of his subject throughout the several hundred pages that slowly peel back the iconic Mary to introduce the reader to the real woman.

Beginning with her childhood father issues, we meet a young girl driven to succeed as a dancer and then an actress, using that now legendary smile to slowly work her way up in early television from a performing cigarette package or a pair of legs to character parts.

Then, of course, we—and Mary—meet Dick Van Dyke, the inevitable co-star of Mary’s story. In spite of her later success with her own long-running series, Dick pops up throughout the book and throughout Mary’s life, all the way up to the end. Both he and Mary are said to have always been extremely private people but Van Dyke always seems to be there for Mary when she could most use him. 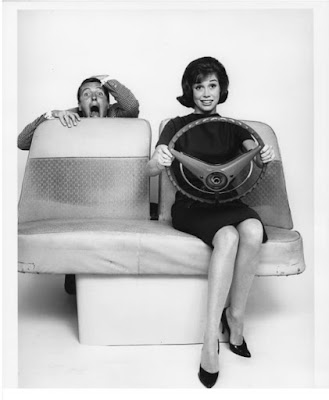 It’s Mary’s comedic success as wife Laura on The Dick Van Dyke Show, arguably THE classic 1960s sitcom, that makes her a household name and catapults her to both the stage and films.

We learn, however, that behind the scenes, there were persistent conflicts with co-star Rose Marie and various other issues. And when it was all over, we learn that in spite of her momentum, she was not able to succeed in plays (Although not entirely her fault, her musical version of Breakfast at Tiffany’s is one of the most ignominious failures of its day) or films (her portrayal of a nun opposite Elvis Presley as a doctor in Change of Habit was a bizarre and interesting failure for both performers).

In the real world, she was proving to be a distant mother to her son by a first marriage even as her mover and shaker second husband, Grant Tinker, tried to promote her to solo stardom. Both she and Tinker had alcohol issues.

It was Dick Van Dyke who came to her rescue again, with a TV special where the gracious actor not only reunited with his former TV spouse but highlighted her special qualities. Fans were suitably reminded and Tinker managed to leverage that renewed interest into what became The Mary Tyler Moore Show.

It was a time for celebration. Unfortunately, it was around this time that Mary also discovered she had Type 1 Diabetes. While she would eventually become a spokesperson against the disease, initially she didn’t handle it well and her continued drinking certainly didn’t help.

The Mary Tyler Moore Show was a hallmark of 1970s television, with its instantly memorable theme song and its strong ensemble cast but mainly with its portrayal of Mary Richards as an independent woman succeeding in life on her own terms. The show’s consistently intelligent writing kept it a Saturday night staple for most of the decade.

Like Lucy and Desi before them, Mary and Grant had formed MTM Enterprises which begat dozens of spin-offs and completely unrelated series, many quite successful, all during the decade. Unlike Lucy, though, Mary did not take to being a businesswoman and left Grant to do the heavy lifting.

Unfortunately, this meant when they broke up, and her series reached its classic ending, she was somewhat adrift and, without his seasoned guidance, her next career steps had more stumbles than successes.

As I read the book, I was constantly reminded of long-forgotten follow-up efforts, from her various attempts at variety shows and new sitcoms, to her blink and you’ll miss them dramatic efforts in TV and on film. Only the Robert Redford-directed Ordinary People, which got her an Oscar nomination, could be considered a major success but its subject matter hit too close to home when Mary’s own troubled son accidentally killed himself around that same time.

Her career status had plateaued. She had reached that level where she was a living legend, adored by the public but unable to get new acting jobs worthy of her talents.

Although the book suffers from some repetitiveness (a comparison to Carol Burnett and Lucille Ball is made at least four times) and could have used a good proofreading (mostly typos), the material is compelling enough and detailed enough for the reader to barrel on through its roughly 400 pages.

Along with a good selection of photos, Herbie has here collected stories and quotes from Mary’s friends and colleagues, from other show-biz authors and experts, and from critics and writers from back in the day. The end result is a pretty detailed portrait of a somewhat lonely woman plagued by tragedy and doubt throughout her life, a woman who could be cold, aloof, and petty, a woman who never really seems to have been particularly happy even though nearly everyone she met loved her, a woman who was often her own worst enemy and, oddly, a woman who relied very much on certain men to paradoxically create an inspiring, lasting portrait of an independent woman.

When all is said and done, I couldn’t help but admire Herbie J Pilato’s telling of her story but I was sorry to discover that the real Mary Tyler Moore was not somebody I myself would have wanted to spend much time with.

But, oh that smile!

Posted by Booksteve at 9:10 AM