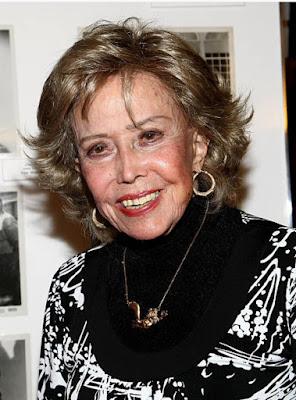 Here are a few brief but interesting excerpts from a transcript I made years ago of the late June Foray's hour-long voice acting seminar that she presented a number of times at the San Diego Comic Con including here, from the late 1980s.

“The first thing...you have to be an actor! I just want to make that absolutely clear because I taught at USC for seven years and a lot of people would say, ‘Hey, June! Listen to this voice,’ and they do a marvelous voice but then I get out a piece of copy and nothin'. I just feel sorry for people who have this wonderful vision of being successful and they aren't prepared.  I'd never discourage anybody. I always say there's hope if you study enough. Ever since I was little I always wanted to be an actress. Since I was six years old anyway. But I was an omnivorous reader and I found that reading the classics, understanding human nature, understanding character so you can leave your own persona and get into somebody else's skin--that's extremely important. However, never let anybody discourage you because there might be that little spark there somewhere and that's very important. Study and read! Very important! Read out loud! Read the classics! Read the newspaper and make it sound interesting. Accent the right syllable y'know? Very important! This is essential. You have got to bug everybody that you meet. Because it ain't easy these days getting into this industry because people know how rewarding it is, how profitable it is, and you have fun driving to the bank with all that money.”

“When you're on-camera, you have to have your pictures. That's de rigueur. But when you just do voiceovers, it's a tape. So if you say...They don't use too many dialects anymore. There are so many segments of society that become angry at doing an accent. But you'll find the common accepted ones. French. Because you have the French chef. Some nasal who comes from Paris. Or Italian. Mel Blanc did...not Taco Bell... Frito-Lay a long time. He did a Mexican accent but he deed (sic) a sing-song of it and it wass (sic) the right one and the Mexicans raised hell about it. So they don't use too many dialects but if you do, do one GOOD one--say French or Italian--just to show your versatility.”

“You know what Daws Butler used to do and I used to admire Daws for doing this? He made a list of all of the characters and somebody would say, ‘Daws, I need a giraffe,’ or ‘I need a pencil,’ or some inanimate object. You're asked to do things like that! Frying pans! Anything! It's crazy, what starts talking! So Daws always kept a list. This voice, this voice, this voice...and sometimes if you can't think off the top of your head just surreptitiously take the paper and look at it and say, ‘Y'know, this voice might be great.’ If you can do impersonations, but maybe they aren't just right, get the idea of that voice and don't SAY it's an impersonation! Daws, in Cap'n Crunch...when he was Cap'n Crunch...There was a character actor named Charlie Butterworth and Daws copied his voice. He's long since been dead. Many, many years! And when, of course, Jay Ward did that...produced it, Daws came in and said, ‘You know what would be a great idea?’ and nobody had done it or even thought about it or maybe even knew about him and he came up with that voice and it was perfect!”
Posted by Booksteve at 6:40 PM