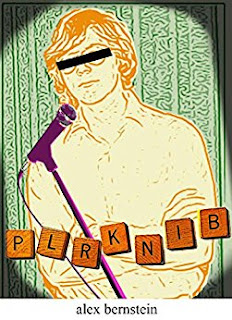 In 1980, at age 21, I answered a newspaper ad from a guy in Cincinnati who was forming a comedy group. I had just completed an acting course and had always wanted to be a comedy writer so this seemed perfect for me.

Over on the other side of town, Alex Bernstein, a few years younger, may have felt the same thing. Only Alex already had some street cred with a comedy radio series of his own on a local station.

From April to October of that year, both Alex and I became major players in the group. Sometimes it felt like we were the only ones taking it seriously. We both wrote sketches and performed and it seemed like we rehearsed endlessly. Being underage, Alex was unable to participate in the club shows we did but I took the lead in a sketch he wrote when we played on Fountain Square and he both wrote and starred in one of the three sketches we performed on television in August of that year.

None of that, however, is in PLRKNIB, Alex’s recently published memoir of his comedy beginnings. Why? I don’t know. To me, it was THE major part of my life that year. When the group fell apart, I kept on seeing two of the young women for a couple years and even briefly had my own offshoot comedy group which appeared twice on Alex’s radio show! He even came by the house and bought some comic books from me. Maybe that’s why I get a “thank you” in the book when none of our other group members are mentioned. 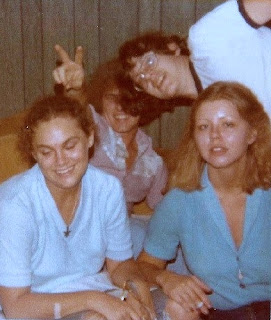 It just wasn't as big in Alex's life as it was in mine. Turns out Alex was busier than we thought that year, struggling with school, parents, a therapist, impending adulthood, etc, but also with an absolute determination to make it as a stand-up comic...even though he was too young to even get in a bar!

We fell out of touch as I, too, got swallowed up by adulthood, but Alex stuck to his dream and, against improbable odds, he really did become the youngest successful stand-up comic in Cincinnati history! This is THAT story.

PLRKNIB is an old-fashioned warts and all, behind the scenes, show biz story, the unusual title tying in to his ace killer joke. A young, gangly, James Franco (with glasses and wacky hair) would play Alex. We meet his friends, fellow students, and fellow struggling comedians, many of whom I recall from back in the day but most of whom are fleshed out here just fine for those who weren’t present.

He successfully channels his younger self’s insecurities and offers enough of his routines and jokes for the reader to get a feel for what it was like. After he made it here, he headed east to make it there. A tougher gig.

CINCINNATI Magazine ran an excerpt from the book last month and next month, Alex returns to the Queen City for a reunion of the old D.W. EYE comics at the 20th Century Theater and a booksigning at Joseph-Beth Booksellers in Cincinnati. He left home a successful performer all those years ago and returns a successful writer!

I suggested “getting the band back together” but of our core members, one woman denies ever being in the group, stalking another reveals several recent tragedies, and most of the rest seem to be just plain MIA.

Maybe that’s why Alex left us out completely. If so few actually remember it, did it really happen?

PLRKNIB happened, though. It’s happening now. And anyone who likes a good show biz underdog story will enjoy it.

https://www.amazon.com/Plrknib-Alex-Bernstein-ebook/dp/B01N3RD9E2
Posted by Booksteve at 10:06 PM