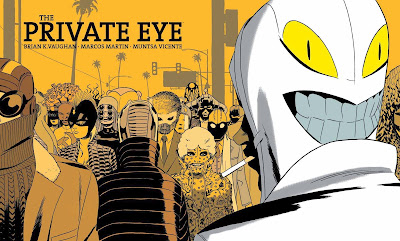 I’ve heard talk for a while now about this hot new comic called THE PRIVATE EYE. In my mind I pictured retreads of Steranko’s classic CHANDLER, hitting on every trope and cliché of the classic detective novel in an effort to create the definitive comic book equivalent.

I just got an ARC of the collected version.

Wow. I couldn’t have been more off base. THE PRIVATE EYE is a science fiction tale set in a not too distant—and yet strangely different—future where reporters act as police, people wear different personas and the Internet blew up decades before. 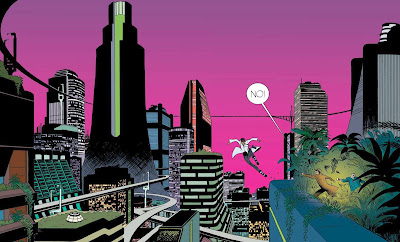 Our hero is a skinny, decidedly unglamorous paparazzi whose initials happen to be P.I. It’s from there that the classic detective plot ensues when a mysterious woman hires him just before she is murdered. Her sister arrives and ends up teaming up with P.I. and his mouthy teenage driver to find the killer. Along the way, they uncover a conspiracy by a media mogul to bring back...INTERNET! And, you see, that’s a BAD thing so they have to stop him! 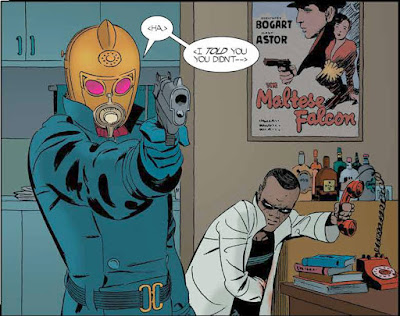 The characters are not very deep but they are given a bit more depth than one might expect in a story like this. Even the villain, disposed of almost too quickly when his end comes, is seen as something more than a standard bad guy.

The most relatable character, however, is P.I.’s grandfather, a spindly old fellow living somewhat in the past with a brain that’s half fried, supposedly from too many good drugs back in the day. He’s the one who ultimately is able to point toward who’s behind whatever is going on, but not before the driver gets nearly killed.

What’s most important here, though, is the world. It’s a bright, yet dark, world of masks and illusions controlled by teevee and the 4th Estate, where people seem to think they have free will whether or not they actually do. 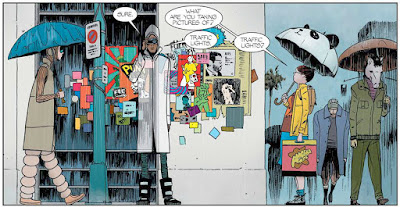 The folks behind THE PRIVATE EYE are Brian K. Vaughn and Marcos Martin (with Muntsa Vicente). They’ve managed to create a future world that looks alien and yet all too possible at the same time. Vaughn was behind Y: THE LAST MAN, one of my favorite series of the last decade or so, where he pulled that exact same trick.

The art is big and colorful and holds nothing back while the whole thing has a marked cinematic feel that’s missing from most comics. First class storytelling from both author and artists. Definitely adult in all the best senses of the word, THE PRIVATE EYE is NSFW in anybody’s book. It also manages to avoid most of those clichés and tropes I mentioned earlier, preferring instead to leave quite a bit to the imagination, which the whole thing fires up pretty well! Oh, there are chase scenes and shootings and kinkiness and such but there’s also a rocket!

If Brian K. Vaughn doesn’t win all sorts of awards for THE PRIVATE EYE, it’s only because he’s busy winning them already for SAGA!