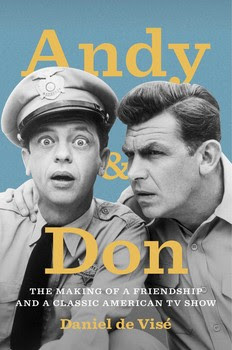 I've got a couple of books on THE ANDY GRIFFITH SHOW from back in the 1980s already but this new book, ANDY AND DON, looks at it through its stars and gives a whole new take on it. And while the book certainly doesn't shy from some gossipy, less flattering bits of behind-the-scenes info, neither does it spread them exploitatively or judgmentally.

At its heart, it's a platonic love story between two men who become fast friends and yet also rivals on several levels. We get quite a bit of background information on the separate childhoods and early careers of our stars, all leading to what seems an almost TOO pat first meeting, precipitated by--of all people--Maurice Evans, the great Shakespearean actor and orangutan orator!

Once they meet, though, Andy and Don click right away to the point where, when Andy is about to start his self-titled sitcom and Don was recently put out of work, they reconnect and the magic that is the first 5 years of Mayberry happens.

There's lots of "making of" details in the section on the show as well as little-known relationship secrets about the actors. For instance, Andy didn't get along with George Lindsey or Francis Bavier and--while he could be said to have discovered Jim Nabors--was always a bit jealous of his success.

Both Andy and Don had substance abuse issues. Andy drank and Don got hooked on pills. Both men cheated on their wives and Andy was abusive to his first spouse.

But they always made room for each other, even when Knotts' film career took off for a couple of years and Andy's was rather stillborn. Andy would appear on Don's TV specials and Don would turn up in various Griffith projects.

The book leaves out a few of Andy's post-Mayberry projects such as his turn as a host on the Mutual Radio Theater in 1980 and the well-done ADAMS OF EAGLE LAKE pilot, and gives only brief mention to others like SALVAGE but for the most part, it's a good career retrospective, paralleling Andy's with Don's as his film career waned and he returned to TV on THREE'S COMPANY. Then came MATLOCK for Griffith and the hit reunion movie, RETURN TO MAYBERRY, for both men.

Through it all, we're shown sides of our heroes that we've never seen before, although rumors and hints had popped up everywhere from THE NATIONAL ENQUIRER to TV GUIDE. But since these less than flattering sides are presented so matter-of-factly, they serve to humanize the actors more, making them seem--somehow for the first time, really--like real people. At this point in my life, I've had the privilege to meet quite a few actors I grew up watching and I've learned that while they are never their characters, they are also rarely their images, either. But that this does not make them bad people!

Two young men meet and whatever else goes on throughout their lives, they always keep coming back to each other until, inevitably, two old men die and their connected story ends. But when the two men are ANDY AND DON, they create a lifetime of love and laughter and folksy wisdom in between  and enjoy each other as friends should.

ANDY AND DON by Daniel de Vise is a very good, very readable, and very eye opening addition to the annals of TV history, being revealing and admiring all at the same time. It's a tough line to balance but the author does it well every step of the way.

The book is due out in hardcover in November but can be pre-ordered now.