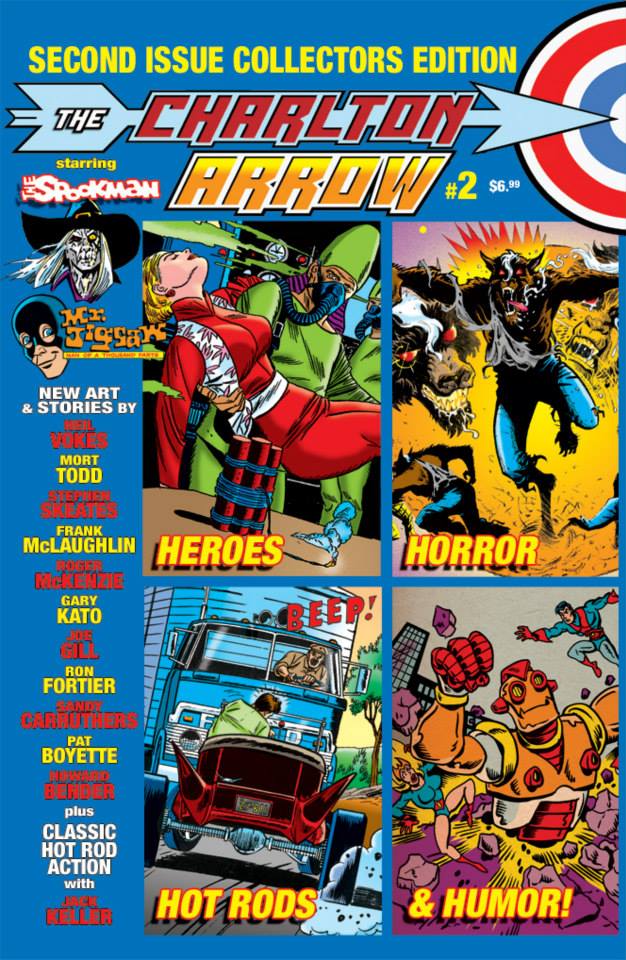 Hey, guys, THE CHARLTON ARROW # 2 is out! I'm not technically in this issue although my name is mentioned in the letters column! To an old comics fan, that's nifty right there! You do get a whole bunch of nifty strips again this time out including an all-new appearance from Mr. Jigsaw! I was late getting my piece in for this issue and the momentum couldn't wait. I've already sent in a couple other pieces for later issues though so keep watching.

Here's Mort's official info on issue 2, which is now available for digital download as a PDF for only $1.99!


DIGITAL DOWNLOAD of THE CHARLTON ARROW NOW AVAILABLE!
Our first issue was a runaway success… can we top it? Signs say YES! Get a load of the line-up: Howard Bender, Pat Boyette, Sandy Carruthers, Ron Fortier, Joe Gill, Gary Kato, Jack Keller, Roger McKenzie, Frank McLaughlin, Stephen Skeates, Mort Todd and Neil Vokes, featuring heroes, horror, hot rods and humor!
This 44 page blockbuster will be shipping in late June, but the first 300 people to order will get a FREE Joe Staton limited edition mini-poster featuring some Charlton Action Stars fated to appear in future issues, including E-Man! What an intense bargain for only $6.99 (plus s&h)!
See art from the comic and ordering info at http://morttodd.com/arrow2.htmlOrder NOW to guarantee a copy of the first printing and the cool Joe Staton print! Get the digital download for $1.99 athttp://www.indyplanet.com/front/?product=110359