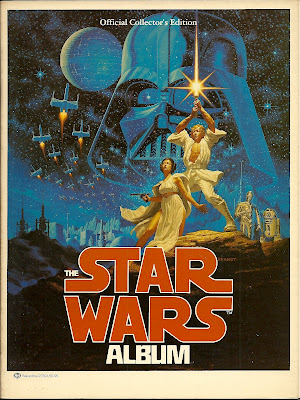 It's easy to put down STAR WARS these days because now it's not only a franchise but a whole generation has grown up with the mythos and seen it distilled into a thousand variations in comics, movies and on TV. What might be a little harder to remember is that when that first movie--now called Episode 4 (Ugh!) came out, 35 years ago today, it was well and truly the biggest phenomenon the movie industry had seen in years.

THE DEEP with Nick Nolte and Jacqueline Bisset was supposed to be the big hit in the summer of 1977.  In fact, George Lucas's costly follow-up to his hit AMERICAN GRAFFITI was considered to be little more than a glorified B science-fiction effort for the kiddies.

There was little advance word in those days. The novelization by Alan Dean Foster (writing as George Lucas) had come out nearly a year earlier and gone virtually unnoticed. Small mentions in a new nerd mag called STARLOG referred to it as THE STAR WARS and gave it about an equal amount of coverage as KINGDOM OF THE SPIDERS and THE PEOPLE THAT TIME FORGOT.

But then people started seeing it. The critics, for the most part, loved it and called it an old-fashioned western set in space. Advance word started to spread. The fans loved it even more! I saw it with a capacity crowd on opening night at the Showcase Cinemas in Springdale, Ohio. That was, in fact, the ONLY place to see it in this area at the time because the other Showcase Cinemas, the one closest to me, had opted NOT to run STAR WARS at all in favor of some now forgotten film they expected would do better. Because of that retrospectively asinine decision, they were prevented from picking up STAR WARS for nearly a month after it had opened!

I knew Mark Hamill from a short-lived TV series he had been in as well as a TV movie with Linda Blair. I had not seen AMERICAN GRAFFITI and thus had no idea who Harrison Ford was. I knew Carrie Fisher from her parentage and from reading about her dirty scene in SHAMPOO, another film I hadn't seen. Alec Guinness, Peter Cushing and the voice of Darth Vader--not at that time credited but instantly recognizable as that of James Earl Jones--were the only others I knew in the cast. 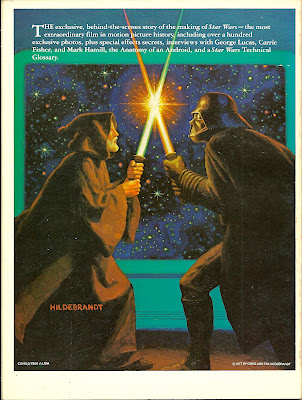 Flashback to 1968 as I eagerly anticipated 2001: A SPACE ODYSSEY only to ultimately be horribly disappointed by what I considered then as now to be dull, pseudo-intellectual sci-fi claptrap. In 1977 it occurred to me that what I had really been waiting for a decade earlier...was STAR WARS.

Just for a second--if it can still be done--take Episode 4 out of context. Forget Jabba and Ewoks and Jar-Jar and Anakin. Just look at this one film on its own, self-contained. It is an extraordinary piece of both filmmaking and myth-making. There is little new in the plot of the young, naive kid whose folks are killed, he teams up with an older experienced gunfighter and they head off across the desert to rescue the schoolmarm...or in this case, princess. STAR WARS is a classic formula dressed up in shiny new clothes with a winning cast, amusing moments and some genuinely exciting action sequences. And the special effects! These days we take for granted what can be done with green screen and CGI but much of STAR WARS effects were miniatures. An amazing group of craftsmen worked on the visual and audio effects. Truss the whole package up in John Williams' rousing score and you really do have an impressive, entertaining package the likes of which had never before been seen on the big screen.


It stayed in the same theaters for over a year and the last time I saw it, the theaters were nearly as crowded as they were that first time. If you weren't there, you literally can't imagine what it was like. A few weeks after I first saw STAR WARS, I went to see THE DEEP when it first opened. It was okay but the theater was mostly empty. Everyone was off seeing STAR WARS again. Happy Anniversary, old friend. May the Force be with you always!
Posted by Booksteve at 10:34 AM