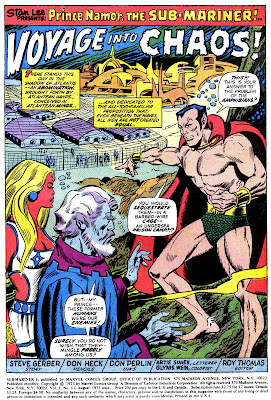 Okay, we're back in better territory at last. Not that this one is all that great but it does at least show that some thought has gone into design and placement. Veteran Don Heck, although much maligned, was truly one of the most original Marvel artists at his peak. By this point, Heck had simplified his style, though, which gave it a sketchy look that's reigned in nicely here by Don Perlin's inks. The reds balance out the sides, the yellows aren't overly bright and the backgrounds are well-done. By the way, "sequestrate" really is a word. I looked it up. Trust Gerber never to write down to his audience. There's also another Tales of Atlantis back-up but I've decided to pass on those in favor of the main feature.