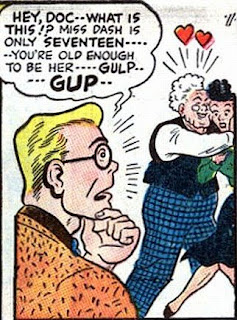 One of my favorite comics-related discoveries in recent years has been the wonderful, polished World War II era cartooning of the oddly named Boody Rogers. Here we have Boody's unique, non-costumed superhero Sparky Watts catching his elderly scientist friend and mentor with some pre-code San Quentin Quail!
Posted by Booksteve at 12:14 AM