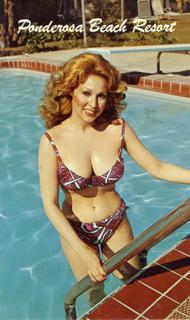 The rather pulchritudinous young woman to the left here went by the unlikely name of Cissy Colpitts. Her star shown briefly in the 1970's. Her best known appearance would have to be as the young potential rape victim in BILLY JACK, saved by Tom Laughlin's half-breed avenger who forces her attacker to drive his car into a lake. Other early film appearances included PORKY'S II.

I first discovered her, however, on THE TED KNIGHT SHOW, the short-lived sitcom that preceded Ted's more successful TOO CLOSE FOR COMFORT. She was hilarious! She affected a very Marilyn Monoroesque (Hey, I coined a word!) delivery and it was a scream, easily stealing the show for me. Ratings were initially high and my 18 year old self decided to write her a fan letter. Then the series was cancelled. Imagine my surprise to recieve a letter from Ms. Colpitts some months later. Not JUST a letter, mind you! I wouldn't be surprised if mine had been the first fan letter she had ever received as she hand wrote a three page missive talking about life, work and the episode of THE LOVE BOAT she had just finished. Along with that was this postcard (I was 18, remember!) and two gorgeous signed publicity photos. Not long after that, she changed her name, undoubtedly at someone's intelligent suggestion, to Cisse Camero 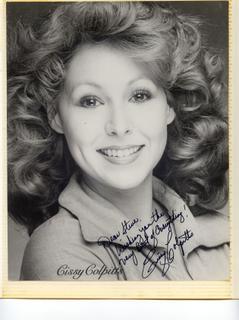 n. I heard somewhere that the new name came from her father, noted hack actor (in the sense that he would take any job that came along) Cameron Mitchell. While she did appear with Mitchell in a later film, I've never been able to confirm their father-daughter relationship. Cisse was given bigger roles in better films, appearing opposite James Coburn in THE BALTIMORE BULLET and the Tim Conway/Don Knotts team in PRIVATE EYES. Ultimately, though, she ended up in low budget thrillers like the dreadful SPACE MUTINY(1988) with her husband Reb Brown (TV's cheesy Captain America in two terrible seventies films).
Now here's the really interesting part: Welsh film director Peter Greenaway has done four movies in which four different characters are named...you guessed it...Cissy Colpitts! I hope Cisse got a smile out of that. IMDB lists her last picture as 1997. Wherever you are now, Cisse, thanks from the 18 year old boy who stayed one of your biggest fans for thirty years!
Posted by Booksteve at 10:09 AM