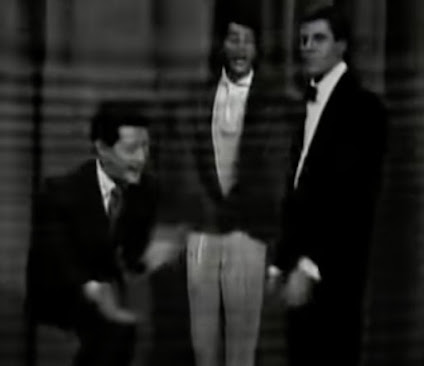 Someone on Facebook was talking about the fact that Dean and Jerry only ever saw each other once after they broke up their act in 1956 and that was two decades later when Sinatra snuck Dean unexpectedly onto Jerry's MDA telethon. Even the two of them said live on the air that they hadn't seen each other in 20 years.
But that wasn't true. Let's face it, if nothing else, they had all the same friends. They were bound to run into each other from time to time.
Above is a screen grab from a 1958 Eddie Fisher television show where Jerry was the guest and Dean came out from backstage just long enough for a quick gag. Fisher obviously didn't expect it but Jerry had just stepped out from behind that same curtain minutes before so it may have been planned.

Above are stills from newsreel footage of Dean and Jerry running into each other at another Eddie Fisher event, this time a spectacular club opening. 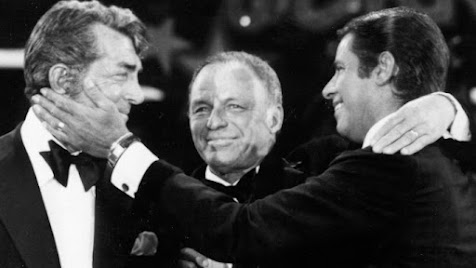 Frank brought them together in the Bicentennial year only to kick Jer off his own stage after just a few awkward minutes so Frank and Dean could sing a duet.
Below is from 1989, as seen on ENTERTAINMENT TONIGHT. Jerry brought Dino a giant birthday cake onstage in Vegas. 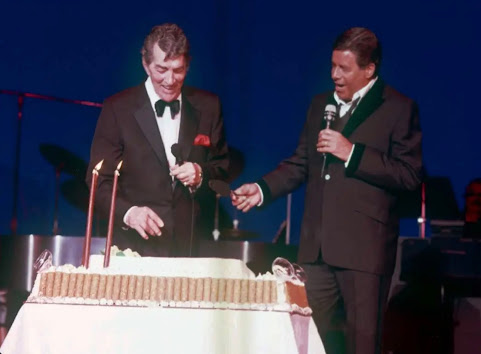 In his book about Dean after Martin passed, Jerry writes that the two old partners spoke on the phone a lot in later years.
When someone has been that much a part of your life--whether it be an old partner, a former spouse, an ex-boss, etc.-- time brings you to a point when you appreciate what they've meant in your story. You may not have a desire to hang out with them anymore, but seeing them from time to time can really make your day.
Posted by Booksteve at 5:17 PM