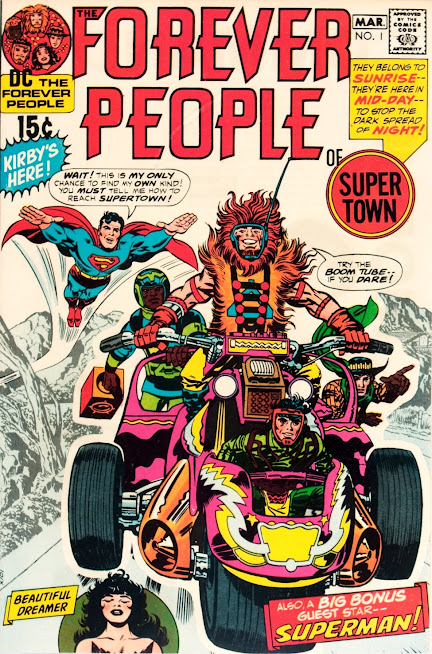 The Grand Comics Database says FOREVER PEOPLE # 1 hit the stands on December 1st, 1970. I had started sixth grade in September of that year and would turn 12 in January of ’71. I had been very close with a girl at my school since third grade and, in fact, we had our first date—to see CHITTY CHITTY BANG BANG—two full years earlier in December of 1968. By 1970, she and I had both had growth spurts and were starting to feel…well, we didn’t have a clue, actually. Our school didn’t even have a sex ed class yet. Didn’t matter. Her family moved a million miles away in November (actually only about a 15-minute drive but what did I know? I was a kid!) and outside of a couple visits to their new house and a year or so of increasingly less frequent phone calls and letters, we never saw each other again.

But that meant by the end of 1970, I was free to “play the field.” After years as the chubby, nerdy kid in school, I had lost weight, stopped wearing my glasses, started wearing fringed leather vests, peace symbol medallions, and love beads, plus I had grown out my sideburns. (My parents still wouldn’t let me grow my hair). I found myself actually trying to fit in and impress the other girls in class.

As far as comic books, I was still making my weekly trek to get them and I was buying more than ever in spite of the fact they’d gone up to fifteen cents a couple of years earlier. But I wasn’t enjoying them as much. The great Atom stories I used to love had been replaced by a combined ATOM & HAWKMAN title, with barely any room for good stories. My favorite, FANTASTIC FOUR, had been clearly treading water for a couple of years. X-MEN and T.H.U.N.D.E.R. AGENTS had been canceled. The epic Legion of Superheroes—for which I had my first letter printed in ADVENTURE COMICS in 1968!—had been relegated to pointless backup tales with only two or three members. GREEN LANTERN (with the very different Green Arrow) was beautifully drawn then but kept getting preachier by the month! Even my beloved SPIDER-MAN was coasting toward what I would consider its first of several shark-jumping moments (the eight arms story that hit later in ’71). And to top it all off came the news that Jack Kirby had left Marvel completely.

I only had one comic book collecting friend left at that point. Just about everyone else I knew seemed to look down on them again after they had been cool for a while when the BATMAN TV show was on from ’66-’68. My parents had put up with my collecting for four years and my mother had stopped randomly tossing stacks of my comics out but my parents never let me forget that they were taking up too much space, too much of my time, and that they were a fire hazard.

One December day after school I came home with a stack of comic books and I sat on the couch reading some that night. I just flipped through them, mostly, realizing I wasn’t enjoying them as much as I always had and daydreaming about how if I’d saved that money, I could've ask Cheri McPherson in my class to go to the movies with me. I talked myself into it. It was time to grow up and put away my childish things. I got up from the living room couch and went to my room to mess with my Captain Action dolls. Ahem!

Unbeknownst to me, the remaining unread comics slid down the side of the couch.

I’m not sure how long it was—surely no more than a few days to a week—that my mother, cleaning off the couch, found those remaining comics and put them on the coffee table. Later that night I saw them and told myself I might as well read them. On top was FOREVER PEOPLE # 1, its cover slightly torn on the bottom due to having been stuffed down the side of the couch.

As I flipped through it, it quickly became obvious that it wasn’t just more of the same old-same old. So many fascinating Kirby concepts and, outside of old familiar Superman, they were all completely new! The Boom Tube, the Super Cycle, Mother Box, Inter-Gang, Supertown, Infinity Man, Beautiful Dreamer, Darkseid! What the heck was happening here? And all the hip young heroes, just like I was imagining myself to be a hip young hero then!

What had I been thinking? I couldn’t give up comic books now, just as King Kirby arose again, promising a renaissance! I resumed my weekly trek to my comics stores immediately, without missing a beat, and kept my eyes open for DC Kirby comics going forward!

Meanwhile, at school, I gave Cheri McPherson my love beads and a couple days later she got mad at me about something and threw them back at me. The heck with that, I thought, and ended up postponing dating for another nine years, until I was 21. Instead I immersed myself in comics more than ever, particularly as comic book shops and conventions began to turn up and I discovered comics fandom.

It was a great time to be a comic book fan, and if not for Jack Kirby, I might have missed it.