The Simpsons in Cincinnati 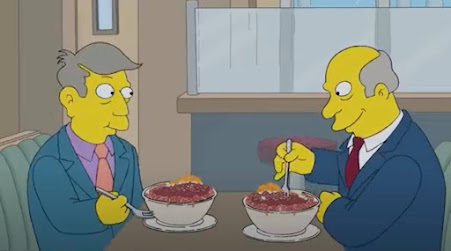 I haven't watched an episode of THE SIMPSONS in maybe ten years. I always figured it would be my favorite show if I had ever watched it more consistently. I did catch last night's new episode. though, entitled, THE ROAD TO CINCINNATI.

There wasn't much Simpsons presence in the episode at all beyond Bart cameos on both ends. This episode featured Principal Skinner and his boss from the school board on a cross country 800 mile road trip to an educational convention in Cincinnati.

The actual plot seemed a parody of just about every buddy film or road trip picture from THE DEFIANT ONES to PLANES, TRAINS, AND AUTOMOBILES. It wasn't until the end when they actually arrive in Cincinnati, which happens to be directly across the river from where I live in Northern Kentucky! 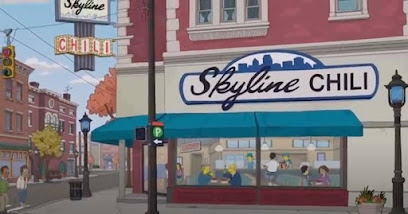 In fact, the final scene of the episode has the two characters eating 4-Way chili from Skyline Chili--and not just ANY Skyline but, as you can see here, the Skyline directly across the street from the apartment (in red) where my wife and I lived in the early 1990s! They changed the apartment buildings but kept so much of the rest of this Google Maps image the same. 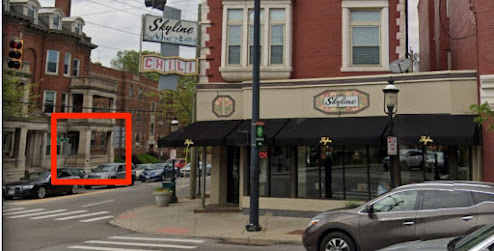 One thing they got wrong is the 4-way. Everybody knows you don't eat a 4-Way from a big ol' bowl as seen above. Oh, no. A 4-Way is eaten from a plate. A large helping of spaghetti has Cincinnati-style chili (a unique, Greek-related delicacy barely related to "regular" chili) ladled over top of it and then beans or onions (your choice--both is, naturally, a 5-Way), and then the whole thing is topped off with a veritable mountain of finely shredded cheddar cheese! 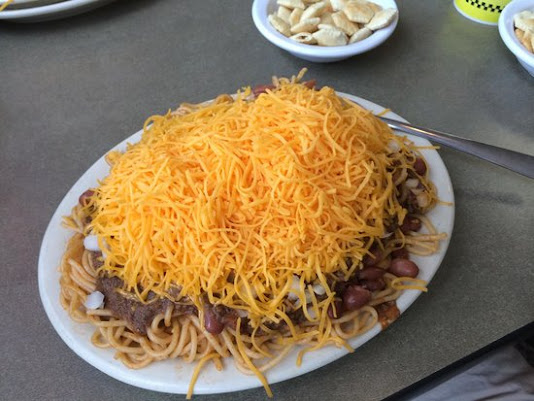 Posted by Booksteve at 9:35 PM