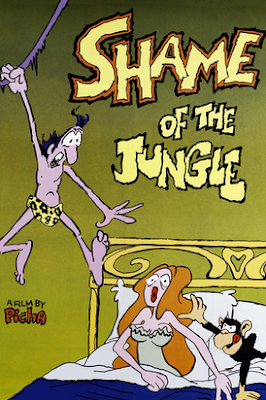 Here's another review I just found that I wrote in 1981, this for a dirty feature length Franco-Belgian Tarzan cartoon comedy. I had seen ads for it when it played locally in 1975 and read a little about some controversy that led the character's name to be changed from "Tarzoon" but that was all I knew when I rented it on Beta in 1981.

A strange little film, this feature-length European cartoon plops an irreverent version of Edgar Rice Burroughs’ Tarzan into a sci-fi tale of strange creatures and a would-be world conqueror. That plot takes a back seat to the film’s basic lunacy and satire, adapted into English by SNL’s Anne Beatts and Michael O’Donoghue. There are more than enough scenes f sex and violence to earn this picture’s original X rating. A bald woman with 14 breasts wants a hair transplant form Tarzan’s wife so June (not “Jane” here) is kidnapped by the woman’s penis-shaped minions. There follows a long chase scene in which our hero (whose name is consistently blacked out on the animation) finds and rescues his mate. The voices are provided mainly by SNL cast members, some uncredited. The best parts are the throwaway gags, both verbal and visual, such as John Belushi’s perfect voice for a 13-year-old slob who considers himself a Zen master and travels on a flying carpet carried aloft by birds. Much of the scatological humor gets old really quickly, leaving the voice acting to carry whatever’s left. Although the English-dubbed voice credits are woefully incomplete, Bill Murray is recognizably in there and classic Tarzan actor Johnny Weissmuller’s son, Johnny, Jr, is credited, presumably as the main character. SHAME OF THE JUNGLE is done in an original, although not particularly fluid, animation style and while there’s really not much here, it should be enjoyable to Tarzan fans, animation fans, or SNL fans who aren’t easily offended…because this movie IS offensive! 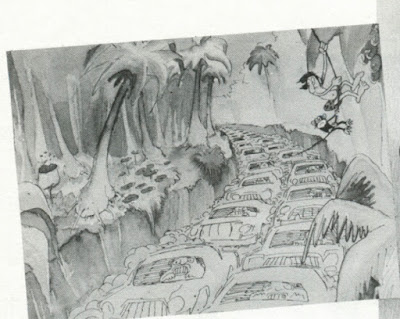 SHAME OF THE JUNGLE is now is on YouTube and has its own Wikipedia page detailing the credits and the film's history at length. Even Christopher Guest, aka Christopher Haden-Guest, Fifth Baron Haden-Guest--you know, that guy from THIS IS SPINAL TAP and BEST IN SHOW--voices several characters. And if you listen closely, you'll hear Judy Graubert, who played Jungle Judy on the kids' show, THE ELECTRIC COMPANY.
Posted by Booksteve at 3:37 PM