For nearly two months in 1930, the Great Profile himself, John Barrymore, was expected to be Sam Spade in the first screen version of THE MALTESE FALCON. Warner's had purchased the then recent Dashiell Hammett story as a vehicle for Barrymore but later announced that new contract star Bebe Daniels would be cast as the female lead was actually a bigger part. 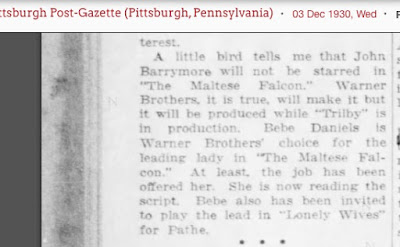 Posted by Booksteve at 4:02 PM