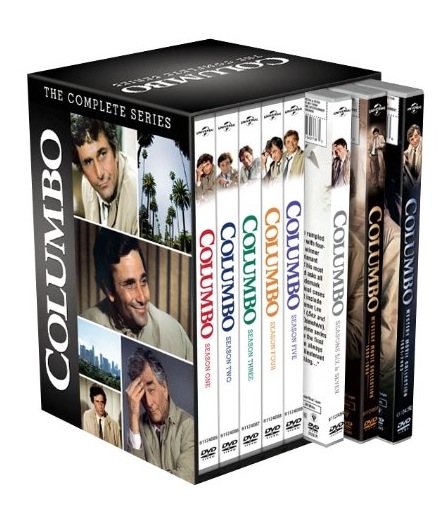 With Ol' Chris now fairly well discredited by historians, there's no need to celebrate his life and deeds--to say the least--but no one wants to give up the holiday. So I've joined the movement to simply rename it COLUMBO Day. Now there's a guy whose life and deeds deserve to be celebrated!

I picked up the above box set as one of Amazon's Deals of the Day last month when I briefly had some money. $100 off the regular price! It's since jumped back up but still nicely priced and highly recommended. Don't recall having this much fun with a box set of DVDs in ages.

By all accounts, Falk could be pretty much a prick, more so at some stages than others, but it's never seen on screen. He gives a consistent performance throughout and the audience is given access to his thoughts only through the subtlest of movements or wordplay most of the time.

It's the guest star criminal that we are led by the generally choice scripts to identify with, knowing every step of the way what he/she did but hoping the Lieutenant picks up on what we already saw!

Every episode was 90 minutes or 2 full hours and there weren't a lot of episodes made in the show's original 7 season run due both to the Mystery Movie format as well as Falk's regular behind-the-scenes dickering for (deserved) salary increases.

Some 15 years after the series officially ended, Peter Falk revived Lt. Frank Columbo (Yes. It's Frank. NOT Phillip) in the first of a series of TV movies that would ultimately last almost as long as the original run and with more than a few entries just as good!

So Columbo Day. Just need to change a few letters.
Think about it.