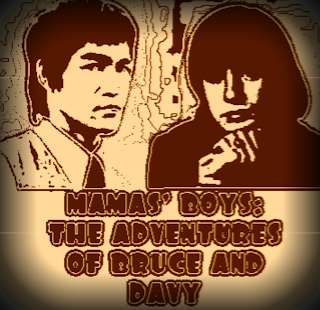 What follows is a parody. It is an amusing tale of what might have been and features characters based not just on Davy Jones but also on other real people. As this is a parody, it in no way reflects what these people were or are like in real life. In point of fact, the actions, statements and beliefs of any and all characters herein are not intended to reflect reality in any way whatsoever. This is a protected parody...and it all began on a Monday afternoon in 1972 in a place where many things begin in Hollywood—a casting director’s office.

“I’m sorry, Mr. Jones but we won’t be able to use you in this new show,” he said with a failed attempt not to laugh. “There are no...monkeys... in our script.” He had emphasized the word “monkeys,” a word Davy had quickly begun to hate as much as he had once loved it.

“Right, then,” was Davy’s reaction through gritted teeth. “S’very funny, mate. Hilarious, innit?” With that he turned and stepped back out into the waiting room without looking back except when he slammed the door. It was at that point that he accidentally bumped into a neatly dressed Asian man wearing dark glasses who was NOT amused.

“Watch it, man!” he barked gruffly.

The man he had run into put his hand firmly on Davy’s shoulder and said, “Hold on, hold on. I recognize you. You’re Davy Jones of the Monkees. What’s got you so hopped up?”

“That’s just it. I’m Davy Jones! ‘Of the Monkees’ is not part of my name! Never HAS been! And besides, I’m NOT even a Monkee anymore! The show is over. The band is over! Yet everyone still pigeonholes me as ‘Davy Jones of the Monkees!’”

Chuckling, the Asian man removed his shades. “I know what you mean. My show’s been off the air now for several years and at every casting office in town, I’m still ‘Kato from The Green Hornet.’”

Recognition dawns. “Wait a minute! You’re Bruce Lee. I’ve ‘eard about you. What are you doing ‘ere?”

“Apparently auditioning for the same show that just turned you down, my friend. A man’s gotta eat. I developed a Western with Warner Brothers as a vehicle for myself and then they went and cast a Caucasian in it!”

“A western? You’re serious?” Bruce nodded. “Oh, that would be great! I’ve always been good with horses, you know! But, yeah, with your looks and my accent, who’s ever gonna cast us in a western?” He turned toward the glass door he had just slammed and said, “And trust me, you don’t want to go in there! It’s only Monday and I’m already ready to...”

The casual banter from the two disenfranchised actors was suddenly interrupted with music as a woman who had been sitting in one of the waiting room chairs all along, hidden behind an open newspaper, began to warble, “Monday, Monday. Can’t trust that day...” She lowered the paper and was instantly recognized by the duo.

“Holy...Mama Cass? What are YOU doing here?” said Davy.

She was a large woman, about 300 pounds, attired in a bright pink pantsuit adorned with red flowers at the neck.  She spoke as she rose from the chair. “See. That’s exactly what you guys were just talking about. Now, I haven’t been with the Mamas and the Papas for a few years and yet you still see me as ‘Mama’ Cass. I guess I’ll always be a Mama and YOU will always be a Monkee.”

“Well, I know one thing,” said Lee. “ I will NOT always be Kato. I’m going to Hong Kong soon to star in some martial arts movies that will make me a STAR!”

“Uh-uh, honey. Not in the US. Americans just aren’t ready for an Oriental movie star.”

Bruce looked as though he were about to argue the point but Davy interrupted. “Say, you still haven’t told us. What ARE you doing here?”

“Me?” she chuckled with a bright smile. “Why, waiting for you two, of course.”

“What?” Davy spouted. “They’re gonna try and draft me again? I’ve already been through all that mess! I’m not even American!”

“We can work on that. Hey, let’s go somewhere where we can talk privately and I’ll explain, okay? Come on. I’m buyin’.”

“But what about my audition?”

“Oh, skip it, Bruce. Davy’s right. This show’ll never get off the ground. Another thing Middle America will never accept is two girls and a guy living together on television!”

A short trip down the street to a quiet restaurant found the trio sitting in a back booth, shielded from prying eyes.

“Here’s how it is, fellas. The United States government has been recruiting agents from within the ranks of show business for years. People who are currently ‘at leisure,’ if you will.  I work for a specially created top-secret government organization SO secret it doesn’t even have a name.

Davy looked puzzled. “But I don’t get it? I thought you were a hippie chick? Free love and getting high. Anti-establishment and all that!”

“Yeah, that hippie thing’s been over a while, too,” she answered as she shook her head. “You TV people really do lead a sheltered life. The most recent thing I’ve done was a guest spot on the SCOOBY DOO cartoon series.”

Bruce frowned and looked down at the table. “Not me. They didn’t even ASK me. Darn it. And I love cartoons!”

“Okay, okay. Well, here’s the deal. We need you guys for a particular assignment. We’ll put you two up in an apartment. Nobody will think twice about two out of work actors hanging out together but in reality you’ll be working for us.”

Once again, Bruce looked annoyed. “Nothin’ doing. I have a wife and kids you know! Why would I leave them to move in with THIS guy? That kind of thing can hurt a guy’s reputation!”

“And I’m not single either! This is ridiculous. Forget it. Not interested.”

“Fellas, fellas...! It’ll just be for two weeks. Here’s what it pays. Cass wrote a number on one of the napkins and slid it across the table to where they could see it.

“Linda can get along for a few weeks without me. I’m in.”

“Sorry. I misspoke. Just forget it. Nothing to do with this case. Still top secret. But messy...very messy.”

“You?? You don’t really think all that karate jazz you did on TV would do any good in real life, do you? You’re knockered!”

Bruce rose and his temper was clearly rising with him. “It. Was. Not. Karate! I do Jeet Kune Do!” With that, Bruce jumped up, emitted an ear-piercing screech and loudly shattered the ornate light fixture over the table with a lightning fast kick. Davy’s mouth hung open.

Mama Cass yelled across the floor, “Put it on my bill, Yossarian! Here. Bruce..., Davy. Sit back down and let me tell you WHY we need YOU two and nobody else for this assignment. There you go. Oh, take that look off your face, Bruce, or I’ll sit on you.

For just a fraction of a second, a smile crossed Bruce Lee’s lips. “Sorry.”

Davy was still nervous but sat back down. “Look, I mean, violence is not my bag, you know? It’s a bad trip.”

Cass used her large hands and arms to casually brush all the remaining bits of the now crackling light fixture from the tablecloth onto the floor. “Have either of you ever heard of Kazbistan?” Blank stares greeted her query. “I’ll take that as a ‘no.’ I’m not surprised. Kazbistan is one of those new mini-oil regimes that seem to pop up all the time lately. Most of them sign various treaties and get swallowed up by the larger oil-producing nations and in a year or two they’re forgotten. In this case, it was land given to a Prince by his father. Being in the desert, they looked and, what do you know? They found oil on it! So for right now, at least, Kazbistan is one of the most important nations in the world...even though it’s not much bigger than Rhode Island.”

“So you’re sending us to the Middle East?” asked Bruce.

“Oh, no. The Middle East is coming here! Prince Achmendat is arriving in the US next week to race his prize Arabian stallion in the Million Dollar Hollywood Stakes.”

“I’ve got tickets to that. I’ve got a thing about horses, you know!”

“And what about me?”

“Bruce, we need you because we have intelligence that a group of deadly Chinese assassins will try to get to the Prince while he’s on US soil and create an international incident. Until Kazbistan gets swallowed up whole by a larger country—and history shows that it will—Uncle Sam needs to be on their good side.”

“So,” pondered Davy, “What exactly do you want from us?”

Watch For Part Two!
Posted by Booksteve at 3:44 PM