Movies That Fell Through the Cracks # 43 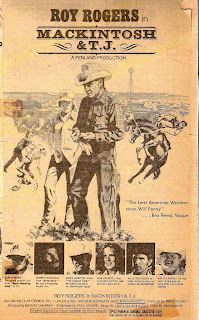 Both Roy Rogers and Gene Autry were called the King of the Cowboys but for my money the title always went to Roy. A recent biography of Gene portrayed him as a womanizing alcoholic in real life. By contrast, Roy was very openly conservative, Christian and, like William Boyd and Clayton Moore also, embraced the straight, good guy values his "Roy Rogers" character had established onscreen for decades.

Long after his film career had ended and his TV series had ridden off into the sunset (and Trigger had been legendarily stuffed!), Roy Rogers resurfaced unexpectedly on the big screen in 1975 in the surprisingly adult western, MACKINTOSH AND TJ. Directed by TV veteran Marvin Chomsky (who also helmed one of my guilty pleasures, EVEL KNEIVEL), it's a coming of age story with Roy giving a rare and quite impressive performance rather than playing "himself."

The impressive cast of seventies supporting players includes Joan Hackett, Billy Greenbush and James Hampton (with whom I once had a nice phone conversation!) while the boy who comes of age is played by young Clay O'Brien, a favorite of John Wayne and already a veteran western star himself. O'Brien would eventually give up acting and become a real cowboy! Underrated actor Andrew Robinson also appears. Robinson could be amazingly over the top as he was as the vicious serial killer in DIRTY HARRY and turn right around and offer a portrayal as subtle as the Cardassian Garek on STAR TREK: DEEP SPACE NINE.
Music was by outlaw country singer, Waylon Jennings, a man who was known to idolize Gene Autry and whom one would think the real-life Rogers would avoid for his rather public excesses.
Overall, an interesting if somewhat slow picture made nonetheless endlessly fascinating by the presence of Roy. As someone on IMDB points out, it makes you wish Rogers had opted for more of these late in life acting gigs instead of just appearing from time to time with Pat Robertson and singing gospel with Dale Evans.

Posted by Booksteve at 8:39 PM