Here’s an African-American hero from Marvel that I’m betting most of you never saw: Joshua! Joshua was a Nelson Mandela type who appeared in Marvel’s 1971 SAVAGE TALES #1. If I’m correct, it’s the only story from that badly distributed first issue (it would be more than a year before the second issue) that has never been reprinted. Sadly, it isn’t any good. It IS, however, fascinating!

Set in Africa during the apartheid years (which were, of

course, then current), BLACK BROTHER purports to be a serious look at a black activist attempting to make a difference and running up against unexpected odds on all fronts. Even his wife tries to kill him! He’s not a super hero, just a guy who wants to help. I have no reason to believe that he would have ever become a super hero, either. It’s all rather heavy handed actually. This story predates slightly the blaxploitation era in films of the seventies but that’s what it’s closest to with an air of sex and violence hanging over it.
Roy Thomas in his bio of the author admits that "Sergius O’Shaugnessy" is a pseudonym but does not reveal for whom. It is, of course, now widely known to be a name used by Denny O’Neil when he was working at Charlton prior to moving to DC. This would have been during Denny’s celebrated "relevant" period which brought us the darker BATMAN as well as the fondly recalled (but let’s be honest also pretty heavy-handed) GREEN LANTERN-GREEN ARROW. Perhaps he was not permitted contractually to work for Marvel at the time but couldn’t resist the opportunity for a more adult storyline. 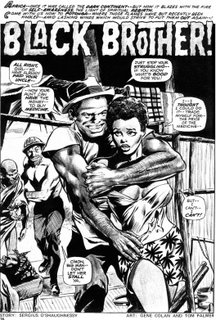 Perhaps he simply wanted to disavow the resulting piece. Whatever the reason, he returned to his pseudonym.

The art, on the other hand, is good black and white work from the Marvel dream team of Gene Colan and Tom Palmer, then best known for their classic work on DOCTOR STRANGE a couple of years earlier and with TOMB OF DRACULA just coming up. Great stuff from that pair as always!

If BLACK BROTHER was ever reprinted, revived or even finished, I never saw it. When the mag returned later on it was nearly all Conan and Ka-Zar and no more attempts at civil rights dramas.
Posted by Booksteve at 6:00 PM