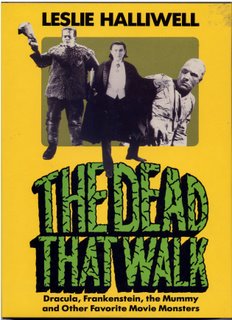 Okay now, people, settle down. This monstrous stuff is nearly done. Remember, this is a library after all so today we’re going to take a look at some books. To be exact, these are some of the BEST books on the subject of horror films and/or horror in pop culture.
Leslie Halliwell was an English author best known for his FILMGOER’S COMPANION series, a constantly updated , annotated, encyclopedic look at films, actors and fimmaking that served as a Bible to film fans in the 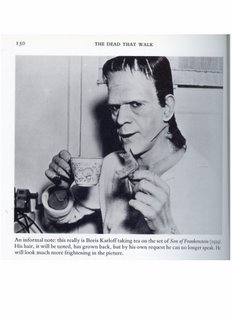 seventies and eighties (After Halliwell’s death, it was carried on by other hands but without the master’s opinionated touch. Better sources soon replaced it.). Other than an autobiographical volume, THE DEAD THAT WALK, published in 1986, was his only non-reference work. It takes an in-depth, somewhat scholarly and yet amusing look at the making and legacy of the classic horror films, offering along the way a selection of the unique photos (such as the tea time one seen here) that pepper the author’s other works. Note that the Mummy featured on the cover is Tom Tyler, not Karloff or even Lon Chaney, Jr. That
probably gave perfectionist Halliwell fits!
Next up is THE HOUSE OF HORROR (which I mail ordered through the back pages of THE MONSTER TIMES!), a 1974 overview of England’s Hammer Studios. Hammer, of course, redefined horror films with more visceral interpretations of the classic monsters in the late fifties and early sixties. By this point, they were gasping for air, however, so the book serves 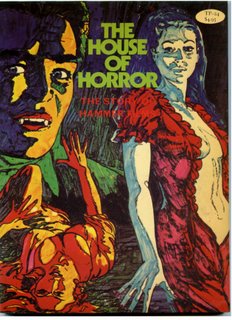 as a fairly complete look at the company. (They would struggle on but it was like somebody flicked a switch and told ‘em to go home.) Heavily illustrated (Bubblegumfink just ran some color scans. Check ‘em out!), there’s lots of emphasis on topless or nearly topless women, perhaps presuming that what sold the films would also sell the book (Hey! Worked for me!) but overall the book serves as a nice tribute to the company that made Peter Cushing and Christopher Lee household names in all the best homes.
As previously noted, Calvin Thomas Beck’s CASTLE OF FRANKENSTEIN could be elitist and pretentious. Thus, no surprise that Beck’s only book, 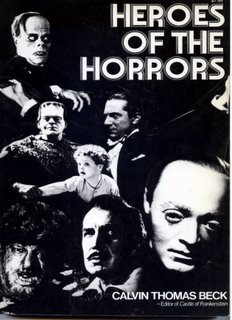 HEROES OF THE HORRORS, published in 1975, follows that trend. It does, however, present the first serious looks at the careers of Karloff, the Chaneys, Lugosi, Vincent Price and Peter Lorre. While it glosses over some of the darker spots covered elsewhere in more recent years (Lorre’s drug problems, Price’s blacklist issues, etc.) it nonetheless strives to reveal the real person behind the makeup. Again, lots of rare illustrations but this time not just from the horror films but also from westerns and comedies and serious dramas. Beck really does give these amazing character actors their due and for years, his work was the only book to really do so in some cases.
Finally, we come to what I consider to be the single best book on the horror phenomenon (although Stephen King’s DANSE MACABRE is right behind 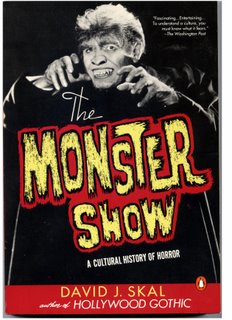 it.), THE MONSTER SHOW by David J. Skal. I purchased this one on March 3rd, 1995 but don’t credit my spooky memory. I left the receipt in the book! This one is a real BOOK book, sparsely (but wisely!) illustrated as it cycles you from the roots of horror entertainment through the real-life terrors of the twentieth century and how they were reflected in our ever-changing media. Sounds heavy but it is immensely readable and fascinating and anyone who likes FRANKENSTEIN or Freddy or Chucky or even ALIEN will find something to like here.
Posted by Booksteve at 8:40 AM