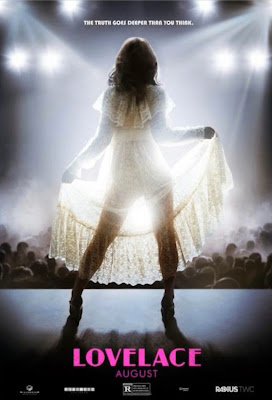 I didn't catch a single movie in theaters in 2013, the first time ever I believe. I did, however, catch the 2013 movie LOVELACE on NetFlix this morning.
This is the film that generated more controversy for its planned star Lindsay Lohan than for its subject, at one time the single most controversial woman in the world. Eventually, she had to be replaced by Amanda Seyfried. It was a fortuitous choice.
Linda Lovelace remains a controversial figure today, partly due to her actually quite brief porn career, partly due to her complete turnaround as an anti-porn crusader and then also partly due to her purported backsliding on the latter in her later years.

Ms. Seyfried does an admirable job of capturing the version of Linda fostered by her own later telling of her story--vulnerable, scared, submissive but lost. I sincerely doubt that Ms. Lohan could have done the role justice.

That said, there isn't much to work with as afar as truly developing the character. As with many biographical films, this one is not so much a linear story as it is a series of snapshots--often confusingly out-of-order depicting sometimes relevant and sometimes random scenes from both her legends and her books. The whole thing is uniformly well-cast with the stand-outs probably being THE SIMPSONS' Hank Azaria as hairdresser turned director Gerard Damiano and Sharon Stone--of all people--as her frumpy, clueless mother. The only bit of casting that seems off is James Franco as Hugh Hefner, a decade too young and with none of Hef's ingratiating gravitas.

The failure of the film to do anything but show us some scenes in the life of this woman while giving--pardon the expression--only lip service to the bigger picture of what she meant to US society in the seventies and since lies with the script and the director. The documentary from a few years back, INSIDE DEEP THROAT, shows the bigger picture better and still manages to tell basically the same story of Linda herself, although not acted out.

Posted by Booksteve at 6:40 PM